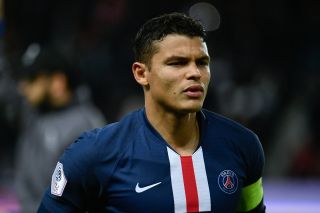 PSG and Brazil legend Thiago Silva has reportedly received a contract offer from Everton as he prepares to depart the French capital.

The centre-back is available as a free agent this summer once his PSG contract comes to an end.

And Carlo Ancelotti wants to bring the former AC Milan star to Goodison Park to bolster his Toffees defence for next season, according to the Express.

Everton have tabled a one-year contract with the option for a further year, but Silva is said to be pushing for a two-year deal up front.

Ancelotti signed Silva for PSG while he was in charge of the Parisian outfit back in 2012, and the Italian is eager for a reunion.

Silva, who is now 35, has continued to feature regularly for the Ligue 1 champions this season with 21 league appearances.

But PSG announced on the weekend that he would be ending his eight-year spell with the club over the summer.

The experienced defender is unlikely to be short on offers, as Arsenal, Tottenham and his former club Fluminense in Brazil have also shown interest.

Silva will remain at PSG until their Champions League campaign concludes.

The capital club have already been crowned champions for 2019/20, after they were assigned the title when Ligue 1 was brought to a premature end due to the COVID-19 outbreak.

It was Silva’s seventh league title with the club, and during his time in Paris Silva has also won four Coupe de France and five Coupe de la Ligue titles.