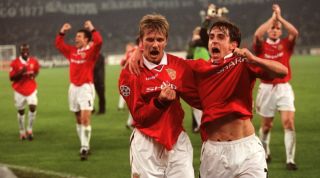 Bearing in mind Liverpool’s European pedigree, we could have chosen several memorable nights for this list. But we've plumped for their 2007 win at the Camp Nou – a top-drawer Rafa Benitez tactical masterclass.

Alvaro Arbeloa kept Lionel Messi in check as the Reds responded to Deco’s opener with goals from Craig Bellamy and John Arne Riise either side of half-time – the same two players involved in an infamous golf club-related hotel bust-up leading up to the game. Bellamy showed characteristic contrition by miming a practice swing in celebration, and later turned provider for Riise to sweep home a 74th-minute winner.

A 1-1 draw at Old Trafford meant a Juventus side featuring Zinedine Zidane, Edgar Davids and a distinctly pre-weave Antonio Conte were favourites to make the 1999 final. After just 11 minutes of the second leg they looked out of sight thanks to two instinctive Pippo Inzaghi strikes which had put the Italians in complete control.

What followed was extraordinary. Roy Keane opened the scoring for a Ryan Giggs-less United midway through the first half, preceding a devastating booking which meant he would be ruled out of the final were United to reach it. But the Irishman was sensational, galvanising his team to push on and equalise through Dwight Yorke, who then hit a post shortly after.

And that was just the first half. United needed to see out the second to advance on away goals, but Juventus added a second striker to pile on the pressure, and only a linesman's flag denied Inzaghi his hat-trick on the hour mark. The Italians never got their third goal, though, and late on Andy Cole made sure of United's place in their first European Cup final for 31 years.

Don Revie’s English champions met Jock Stein’s Celtic in the first ever European meeting between British clubs. Leeds were favourites, but Celtic midfielder George Connelly scored just 40 seconds into the first leg at Elland Road to give the Glaswegians a huge advantage.

The second leg was played at Hampden Park, where Celtic won 2-1 in front of some 136,000 supporters to see them through to a second European Cup final in four years.

The truth about Ander Herrera's future at Manchester United

Didier Drogba’s first-leg goal had given Chelsea a slender lead to take to the Camp Nou, but that headstart always felt essential to even have a chance: Barcelona were defending champions, considered by many to be the greatest side ever. Chelsea had caretaker Roberto Di Matteo pitting his wits against Pep Guardiola. If Plan A didn't work, Plan B was Fernando Torres.

As it turned out, Plan B was needed rather quickly. Within 44 minutes Chelsea were two goals and both centre-backs down; Gary Cahill limped off after 26 minutes, before John Terry was sent off for violent conduct. But then a lifeline: Ramires pulled a goal back in first-half stoppage-time which gave the Blues a semblance of hope.

Once again it didn't last long: four minutes after the break, Barça won a penalty after Didier Drogba tripped Cesc Fabregas – only for Lionel Messi to miss from 12 yards. As it turned out, the Argentine would pay a heavy price indeed. In stoppage time, Chelsea broke via the much-maligned Torres, who rounded Victor Valdes and slotted in to cap a sensational aggregate win against the odds.

There was a time when Arsenal didn't routinely fold at the first sign of adversity, and were instead blessed with the quality, grit and determination that allowed them to compete with Europe’s finest.

In truth, this was not the greatest Real Madrid team ever assembled: they finished 12 points behind Barcelona in 2005/06 and didn't get close to winning a trophy. Still, though, a trip to the Bernabeu was hardly appealing – and Arsenal had significant injury problems to contend with. Mathieu Flamini played the first of his five knockout games at left-back; Robert Pires wasn't fit enough to start; Patrick Vieira was out altogether, and a 20-year-old Cesc Fabregas holding fort in his stead.

But Arsene Wenger's side didn't let it show, and their superb showing was rewarded in the 47th minute through Thierry Henry's magnificent solo effort. Arsenal battled on to the final beyond Juventus and Villarreal, before falling agonisingly short to Barcelona in Paris.

Poor Leeds. Twenty-two years after defeat against Celtic, Howard Wilkinson’s title winners were drawn against Scottish champions Rangers – but only after an unprecedented reprieve against Stuttgart in the previous round. The Whites' domestic title defence wasn't going quite to plan, though, and they went into this game off the back of only four wins from their first 15 league matches.

Elland Road remained a hideous place to visit, however – despite finishing 17th, Leeds only lost once there all season in the Premier League – so Rangers were glad to bring a 2-1 first-leg lead to West Yorkshire.

The second leg started in breakneck fashion: Eric Cantona was denied by Andy Goram from close range in the first minute, before Rangers' Mark Hateley scored with a thunderous volley two minutes later. The tie was effectively over in the 58th when Ally McCoist finished off a counter-attack. Cantona got a consolation, but Rangers were deservedly through.

By the time Spurs played Milan, they'd already surpassed expectations in their first season among Europe’s elite for almost 50 years. They topped a daunting group containing Inter, Twente and Werder Berlin, and were involved in two thrilling matches against the former.

Still, they didn’t have Gareth Bale upon their return to San Siro. They did better than merely limit damage without their star man, though: Heurelho Gomes made several superb stops before a lightning counter-attack 10 minutes from time ended with Aaron Lennon teeing up Peter Crouch for a memorable winner.

2016 was not, with hindsight, a great year for experts. Following a title win so implausible that two seasons on we can all be forgiven for triple-checking it definitely happened, critics were still suspecting that Leicester might be found out in the Champions League.

Club Brugge represented a gentle opener for the Foxes’ first ever Champions League match, but Claudio Ranieri's side had made a terrible start to their title defence. In perfect 2016 style, however, the East Midlanders turned on the style to win comfortably through a Marc Albrighton opener and brace from Riyad Mahrez – the first a sumptuous free-kick. Not a bad way to start life in Europe's premier competition – and it didn't end until narrow quarter-final defeat to Atletico Madrid.

It’s not all been doom and gloom for Leeds in European competition, though. In 2001 they needed a draw in Belgium to reach the quarter-finals, but came away having sunk four past the domestic champions.

It was supposed to be tougher than this: Anderlecht had, after all, beaten Manchester United to top spot in the first group stage and won every home game along the way. They'd still conceded five goals in a 5-1 humping at Old Trafford, mind, and David O’Leary’s exciting young side made sure they inflicted similar damage away from home as goals from Alan Smith (two), Mark Viduka and Ian Harte gave them a famous victory.

The real drama had already come in the first leg at the City Ground. Cologne scored two early away goals inside 20 minutes, but a stirring Forest comeback had seemingly given the East Midlanders a vital 3-2 lead for the return in Germany. With five minutes remaining, however, Cologne's Japanese midfielder Yasuhiko Okudera made history by becoming the first ever Asian scorer in European Cup history.

What followed in the second leg, then, was an archetypal classic away performance in Europe; Brian Clough’s impeccably organised side defended stoutly before a 65th-minute Ian Bowyer winner sent them through to the European Cup final at the first attempt.

INTERVIEW Ronaldinho: "I was 48 hours from joining Manchester United..."