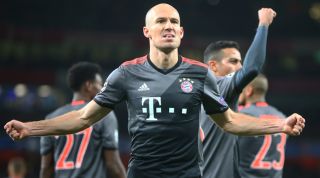 (Please note: This is in age order, so just wait 'til you hit those proper golden oldies.)

The flying Dutch winger has looked about 33 for more than a decade now, but he’s still playing with the pace and verve of a much younger man – as Arsenal would attest. Robben missed Bayern Munich’s first six games of the season but has plundered 12 goals in 25 appearances since September, as well as providing four assists as the Bavarians aim for glory both domestically and in the Champions League. Full-backs still don't know how to stop him cutting inside onto his left foot and shooting at goal.

Mario Balotelli has grabbed the headlines for high-flying Nice (and not always for the right reasons) – but their title challenge in France has been built on defensive resolve more than attacking firepower. Centre-back Dante has been central to their solidity after joining from Wolfsburg last summer, helping the south-coast side to third spot in the standings.

De Rossi can't quite match Xabi Alonso in the facial hair department, but he more than makes up for it with pure, focused rage. That’s helped drive a more physical Roma side to second in Serie A this season, and their long-time midfielder has been a key performer, chipping in with four assists.

In Roma terms, of course, the 33-year-old De Rossi is just getting started – Francesco Totti's still chugging along at the age of 40, after all.

Atletico Madrid have consistently been punching above their weight for years under Diego Simeone, and captain Gabi has been a huge part of their success. The solid and reliable midfielder came through the youth system at the Vicente Calderon, but has made his biggest impact since returning from a four-year spell at Zaragoza in 2011.

The 33-year-old – who was reportedly the subject of a huge offer from China in January – recently signed a new contract that will keep him in Madrid until the end of next season.

The diminutive striker has always been prolific, but Defoe’s exploits at Sunderland this season have almost single-handedly given the Black Cats a chance of remaining in the Premier League. The 34-year-old has scored 14 goals in 27 games, leading to rumours of a long-awaited England return and suggestions that he could still cut it at a club like Liverpool or Tottenham.

For David Moyes, the January transfer window was simply about keeping Defoe at any cost – without his goals, Sunderland would surely be doomed to demotion already.

The journeyman forward has struck 12 goals for Cagliari this season, hitting his best form towards the end of a career that has featured him roaming around Italy like a bus full of tourists, pausing only for a brief two-appearance spell at West Ham in 2014. The striker, who claims he could have signed for Real Madrid or Manchester United earlier in his career, recently revealed one of the secrets that's kept him performing well into his 30s.

“I wear a mouthguard when I play and when I sleep,” he said. “My body might seem in perfect shape, but my two legs don’t quite match up. The ‘bite’ and a special sole in my shoe help me to use my strength better. I also sleep more soundly and don’t grind my teeth anymore.” Fair enough.

Behind Robben and in front of fellow old-timer Philipp Lahm – Bayern might want to think about buying some new players – sits Alonso, their classy midfield metronome. Sure, the passage of time has taken its toll – there are a few grey hairs in that luxurious beard now – but the former Liverpool lynchpin remains as reliable as ever.

Alonso announced on Thursday that he will retire at the end of the season, so make sure you enjoy the final few months of what has been a truly superb career.

He may be resting those aching bones for the next few games after being handed a three-match ban, but Ibrahimovic is no slouch. He’s proved his doubters wrong in some style this season, as those who questioned whether he could do it in the Premier League in the autumn of his career were swiftly silenced with four goals in his first three games.

A frustrating drought brought some criticism before the Swede found his scoring boots again, helping Manchester United to their first trophy of the Jose Mourinho era in the EFL Cup final. “This is what I predicted,” said Ibrahimovic, who has 26 goals in 39 games, after his brace at Wembley. If only he’d seen Tyrone Mings coming.

The Athletic Bilbao striker is another late bloomer who made international headlines for his goalscoring exploits last season, where he joined the likes of Lionel Messi and Luis Suarez at the top of La Liga’s goalscoring charts. That led to him earning his second Spain cap in early 2016 – five-and-a-half years after his first – and a place in Spain's Euro 2016 squad.

Aduriz hasn’t been quite as spectacular this time around, but still has a healthy tally of 16 goals in all competitions. In November he netted five times in his team's 5-3 Europa League triumph over Genk, while he celebrated his 36th birthday in February with an 89th-minute winner against Deportivo La Coruna.

In a shocking indictment of the West Brom forward line, 37-year-old centre-back McAuley is joint-top scorer at The Hawthorns with seven goals – all from set-pieces – in all competitions this term. The Northern Irishman was a late starter – he didn’t make his professional debut until the age of 24 – but he’s making up for lost time now, and has been central to the Baggies’ excellent campaign.

Quiz! Can you name the top-scoring Premier League foreigners by their debut seasons?

Revealed! The 10 most creative players in the Premier League this season

A brief history of cheating: 29 of football's dirtiest tricks EVER

Cast your mind back to November 1995, if you can. Bill Clinton was President of the United States. Toy Story had just wowed cinema audiences with its cutting-edge CGI. And a gangly 17-year-old by the name of Gianluigi Buffon made his professional debut for Parma.

Twenty-two years later and the Italian is still doing the business for a Juventus side that sit top of Serie A and are still on course for a treble. Unlike some goalkeepers whose reactions fade as they age, Buffon is as sharp as ever – although the formidable defence he has in front of him for both club and country no doubt helps.