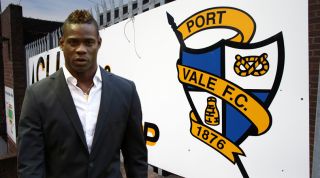 Transfer talk is a source of misguided optimism and confusion for many, and those pesky ITKs certainly don’t make things any better.

Still, there’s been some bizarre ‘legit’ rumours so far this summer – legit being from so-called reputable sources that surely, surely wouldn’t make a thing up to sell a few rags or get clicks. Right?

Allen was the subject of much speculation after an impressive Euro 2016 campaign, but Jurgen Klopp was willing to listen to offers for the 'Welsh Xavi' (goddammit, Brendan). Manchester United were linked with the Welsh midfielder (by lots of newspapers claiming they’d seen links elsewhere, in a vicious circle of chatter) but after Stoke beat them to the signing, they went for Paul Pogba instead. Maybe.

Oxford has been linked with moves away from West Ham ever since his debut as a 16-year-old last August, but most of those have been to the usual suspects – Arsenal, Liverpool, Manchester United and such. The strangest link came via Germany's most hated club, newly promoted RB Leipzig, who in their attempts to make English people dislike them too tried to bag one of the country’s hottest talents with a £20,000-per-week contract (so said 'Sky Sources' anyway, aka Twitter). He’s gone nowhere.

In a desperate attempt to avoid playing Simon Mignolet, and before the capture of professional Instagram model Loris Karius, Liverpool looked at taking Reina back to Anfield according to Corriere dello Sport.

The Spanish keeper, who played over 250 times for the Merseyside outfit, was also the source of speculation he’d offered himself to Barcelona but responded furiously on Twitter to the suggestions. “Bulls***!” he squealed.

Turns out these weren’t so ridiculous after all. On Thursday Luisao – of 473 Benfica appearances, 44 Brazil caps and five Primeira Liga titles – was reported in London to complete his move to Molineux.

He’s now 35 but looks set to land a final payday to the tune of £50,000 per week in the Championship. Wolves were bought by a Chinese conglomerate with ties to Jorge Mendes, and have duly snapped up three Portuguese players since.

The highly rated Anderson Talisca, however, doesn’t look like he’ll be joining the orange revolution. Despite a reported £20m bid it seems the 22-year-old didn’t fancy taking his next big career step into English football’s second tier. Weirdo.

Robson-Kanu was deemed surplus to requirements by Championship side Reading but after his glorious Cruyff-turn-and-finish that dumped Belgium out of the Euros, he was a wanted man. Well, apparently.

Another man who knows about special international tournament goals, James found himself linked with overly confident West Ham by The Independent.

Though determined to sign every single player out of their reach, the Hammers finished up with Andre Ayew who duly got himself crocked on debut for four months.

With over 100 caps, 25 international goals and spells at Real Madrid and Tottenham to his name, the Dutchman’s CV had Royals fans purring – but a reunion with former Holland team-mate Jaap Stam wasn't to be.

Despite talks, according to getreading, Van der Vaart ended up at FC Midtjylland after an awful spell at Real Betis in which he played only seven La Liga games. Perhaps a bullet dodged.

Back in 2012, Falcao secured his place as arguably the top marksman in Europe, when he beat Petr Cech four times in a 4-1 Super Cup win over Chelsea. Two serious injuries and as many disappointing spells in England later, and the Colombian found himself “offered to” Aitor Karanka’s newly promoted Middlesbrough, according to The Telegraph.

Alvaro Negredo was deemed a better choice, and Falcao has stayed put at Monaco.

Lionel Messi, Luis Suarez and Neymar are really, really good. So good, in fact, that they are irreplaceable. How to even try to do that? You sign a player who fits your style of play, one used to featuring in a free-flowing, attacking team like... Tony Pulis's West Brom. Of course!

Luis Enrique can’t play his star trio every week, and there is a genuine keenness in Catalonia to find a Plan B this summer. The Mirror say Barça are “monitoring” the Baggies hitman, after being knocked back by Kevin Gameiro and Nolito.

Reality has bit the Magpies hard in a Championship season that started off with losses to Fulham and Huddersfield. Still, it hasn’t stopped fans dreaming of some far-fetched transfers with Rafa in charge.

Italian newspaper Il Mattino suggested they’d made an attractive £25m (!) offer for Lorenzo Insigne, who played under Benitez at Napoli, but the pint-sized forward might have been a step too far after a personal best 12 goals in Serie A and place in its team of the year.

Fenerbahce man Van Persie has been linked with a whole host of clubs this summer: Stoke, Middlesbrough, Sporting among others.

He remains in Turkey for now, but last month bookies suspended betting on a move to Scottish giants Rangers. Odds shortened to 1/5, but the Dutch hitman never moved to Ibrox. It’s the move he wanted, according to the man himself. Back in 2002, that is.

Agbonlahor had scored in every Premier League season since 2005/06, back when Juan Pablo Angel, Patrick Berger, Milan Baros and Eric Djemba-Djemba still wore claret and blue. Villa fans' goodwill towards the England international has waned, though, after a dreadful 2015/16 in which he was stripped of the captaincy and suspended.

Roberto Di Matteo has allegedly told the 29-year-old he isn’t required this season, so when an Agbonlahor Instagram post allegedly sent from Coventry station sparked a Twitter frenzy, Sky Blues fans got their hopes up (they’ve been harshly treated, let them off). This was, however, despite the fact it said ‘on route [sic] to the capital city’. Never mind.