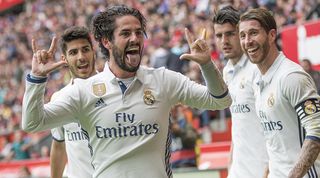 Ah, the transfer market: intense tabloid speculation, weeks of tedious negotiation played out in the full public glare, and incessant Twitter rumour accounts with a ‘world exclusive coming up at 6pm’. We can’t wait for it all to begin again.

At this time of year, many moves are already being decided. “Recruitment is an ongoing process and continuous all year round,” one top manager told FourFourTwo recently, meaning that many people behind the scenes already know of players’ intentions and who’s likely to end up where.

It then comes down to negotiations; securing the best deal, waiting for replacements to be found and so on. But enough of the machinations of the insalubrious football transfer industry. Who will be the main protagonists from June to August? Well, in all probability, these men…

The Frenchman might be the capture of the window for one of Europe’s heavyweights. His future seems inextricably linked to that of Diego Simeone’s after the Argentine super-gaffer curiously reduced the length of his Atletico Madrid deal last summer.

Griezmann reportedly has a buy-out clause in the region of £85m, making him only available to a select few. Meanwhile, his advisor Eric Olhats (Griezmann doesn't have an agent after parting ways with his last year) has revealed that Champions League qualification is a prerequisite for any switch. No pressure then, Jose.

The Frenchman is one of the most wanted men in France having scored 24 goals in 27 matches in Ligue 1 so far this term.

Heavily linked with Arsenal last window, some outlets have claimed that Manchester City are also interested in recruiting a player who Lyon supremo Jean-Michel Aulas believes is comparable in price to Griezmann. Despite this, the 10-cap France international is intimating that this summer is the right time for him to finally challenge himself at a new level.

Lyon have sold in the past and might be tempted by a big enough offer.

Hans Joachim-Watzke, Borussia Dortmund’s CEO, announced earlier this week that Aubameyang will only leave Thomas Tuchel’s team for either Barcelona or Real Madrid.

The German side will be loathe to sell another of their stars to rivals Bayern Munich, while Auba himself may not fancy the move to the Premier League, leaving the path clear should Zinedine Zidane choose to grab a more pacey attacker to lead the line at the Bernabeu. The Gabonese has made no secret of his desire to play for los Blancos before his time's up.

Could go to: Barcelona, Real Madrid

The saga has already begun. Danny Murphy gave his two pennies on how it makes sense for Lukaku to move on now, and other Match of the Day analysts decreed that a move to Chelsea to be too good an opportunity to turn down - seemingly forgetting that Everton have turned down monstrous bids in the past and still hold the attacker to two more years on his contract.

If Rom decides to upsticks and move, Everton will have a straight choice of accepting circa £70-80m this summer or closer to half of that the year after. That, in turn, is likely to be dictated by whether Ronald Koeman feels an adequate replacement can be found for the 23-goal leading Premier League marksman.

Could go to: Chelsea, Manchester United... or simply stay at Everton (signing a new deal)

Another saga already in full… zzz… sorry, let's start again: the Chelsea sub-plot has actually added an interesting twist to the standard ‘will he stay or go?’ Arsenal chronicle. It seems to be a straight up choice between PSG, Arsenal and Chelsea, with much hinging on whether the Gunners make the Champions League and can be persuaded to sell to a London rival (they wouldn't, of course – it'd be a PR disaster). Juventus could be another possibility.

Could go to: PSG, Chelsea, Juventus or a new deal at Arsenal

Part deux of the double whammy that is The Great Arsenal Transfer Debate of 2017. The German playmaker has already gone public on his wish to review things at the end of the season, and his fate may be entwined with that of Arsene Wenger. Ozil's recent form might put off big-club suitors, but he'll need a club that can satisfy his wage demands too. It's most likely he'll stick around in north London.

Could go to: PSG, Bayern Munich

You get the feeling that this could be a done deal if United go on and qualify for the Champions League. Ibra has spoken candidly of needing to play out his last few years at the highest level and may not be willing to miss out on Europe’s elite club competition again (even despite his injured status).

Although United might miss out on the top four – with a tough run-in, many games to play in the Europa League and defensive injuries beginning to mount – winning Europe's secondary competition is well within reach of Mourinho & Co. And with that Champions League bounty, more Ibra and possibly Griezmann too.

Could go to: Juventus, MLS, China or sign a new deal at United

Barkley is currently deciding whether to sign that new contract which boss Koeman keeps pushing his way via the media. There’ll be plenty of ‘this is the best place for him to develop’ talk to come as Barkley weighs up first-team football against Champions League participation.

This one is in the balance, but - if Manchester City, Tottenham or Chelsea are willing to stump up the eye-watering fee Everton would surely demand - the player himself might find it hard to resist.

Could go to: Manchester City, Tottenham, Chelsea or sign a new deal at Everton

Only this week the Spain international revealed how he’d talked over a move to the Premier League with Mauricio Pochettino and Antonio Conte, the latter having a lasting effect on him. And with only 12 La Liga starts so far this season, there’s bound to be further speculation in the summer regarding a move. “I loved Italy but if one day I have to leave, I’m sure it will be to the Premier League,” he recently told the Guardian’s Sid Lowe.

Could go to: Chelsea, Tottenham

The Monaco wonderkid is linked with a move to a European giant on a daily basis. He’s likely to sign either a lucrative new deal at Monaco or for one of the big boys come the summer, given his outstanding displays in Ligue 1 and the Champions League.

Few will be able to shell out the sort of fee Leonardo Jardim’s side could demand, though - and the 18-year-old has already stated that he’d liked to develop at the Stade Louis II for a bit longer yet. Finance may dictate otherwise.

Real Madrid’s Spanish playmaker has started just 16 Liga games this season but still has 10 goals and six assists to his name. Zinedine Zidane has been consistent in his praise for the super-sub who's in sublime form as the season ends - and it could still be James Rodriguez who instead departs from the Bernabeu.

Until then, we can expect this one to run and run. With just 12 months on his contract, adding to the uncertainty and increasing speculation, the decision will ultimately be the Spaniard’s.

Could go to: Chelsea, Tottenham, Manchester City or stay at Real Madrid

Despite reports earlier in the season that Monaco may be prepared to let Thomas Lemar leave the Rouges et Blancs, it seems more likely that clubs will instead chase the summer’s most wanted young talent Mbappe and the much-coveted Bernardo Silva. Fans of the silky Portuguese playmaker include Conte and Pochettino, according to reports.

Another talented youngster linked with a new club every week. Monaco are the latest Champions League club credited with serious interest – and it could be that the Anderlecht midfielder, who is close to hitting 20 goals for the season – could be a replacement for either Bernardo Silva or Tiemoue Bakayoko.

Whoever wins the race – and it does seem that club vice-captain Tielemans is ripe for the picking, though the offer of first-team football seems key – is likely to gain one of Europe’s most talented teenagers.

Crystal Palace’s powerful, skilful winger has grown in stature this season, playing a key role as the Eagles have dispatched both Arsenal and Chelsea in recent weeks.

It’s well publicised that Spurs failed with a bid last summer, and no new contract has been offered by Steve Parish and the Palace hierarchy; now bigger fish may now be set to move in if the idea of Champions League football turns the Ivorian’s head.

Could go to: Manchester City, Chelsea, Tottenham or sign a new deal at Palace

11 international greats who flopped in the Prem

Quiz! Name the 30 Asian footballers to have played in the Premier League

Torino’s Andrea Belotti has scorched his way to the top of the Serie A charts. It would take a huge fee to prise him from the Stadio Olimpico Grande Torino, but local rivals Juventus or another European superpower might be prepared to make that investment.

James Rodriguez could be the man to make way as Real Madrid target new attacking reinforcements this summer, with their transfer ban coming to an end. Club supremo Florentino Perez will want to make a mark.

Erik Lamela has just 12 months on his deal left, meaning he’ll need to sign a new one or be sold by Daniel Levy this summer.