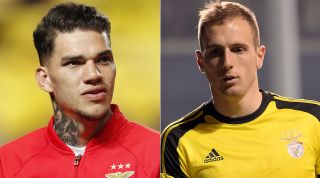 Oblak won the war for Rio Ave's place in the starting XI, playing 31 games to Ederson's eight as the Vilacondenses finished sixth in the Primeira Liga.

Both keepers grew in stature the following campaign; Oblak back at Benfica, and Ederson assuming more responsibility at Rio Ave. Atletico Madrid snapped up Oblak for a bargain €16m in 2014, and Benfica took Ederson for a cut-price €500k one summer later. Two years later he was Manchester City's – for €40m.

Moyes is a Preston stalwart, having spent six years there from 1993-99 and ended his playing career at Deepdale. He made more appearances for the Lilywhites than any other club in his lower-league career, and quickly transitioned to the coaching staff – managing them between 1998 and 2002, and steering them from Division Two to the First Division play-offs.

In 1994/95 he was joined at Preston by a teenage David Beckham, who arrived on a brief loan spell from Manchester United. Becks only turned out five times for the Third Division side but managed to score twice – one, direct from a corner.

"We went to watch him playing for Manchester United’s reserves at Walsall," Moyes later recalled to FourFourTwo. "I was player/assistant manager to Gary Peters. Becks was a skinny boy and I said to Gary in the car on the way home: 'He’s not going to be strong enough for us.' Gary said: 'No, he’ll be fine.' And he was. We got promoted at Orient that year and David and his dad came into the dressing room. He was in United’s first team by then, but he didn’t forget us."

Yep. Former goalkeeper Friedel spent the vast majority of his career in England, playing 624 games for Liverpool, Blackburn, Aston Villa and Tottenham (and zero during an oft-forgotten loan spell at Newcastle in 1994).

The American’s first stint on this side of the Atlantic came in Turkey, though, where he made 37 appearances for Galatasaray in 1995/96. Romanian legend Hagi was among his colleagues in Istanbul – if only briefly, having joined shortly before Friedel left for Columbus Crew in summer 1996. Attacking midfielder Hagi rounded off his career with four Super Lig titles, two Turkish Cups and a UEFA Cup.

Mahrez and Mendy have eventually been reunited at Manchester City, five years on from the two left-footers playing together in Ligue 2 at Le Havre.

Mahrez moved to the Normandy-based outfit in 2010, initially playing for the club’s reserve side before later establishing himself in the first team. Mendy, meanwhile, joined the Ciel et Marine as a 13-year-old in 2007, before spending two seasons in the senior squad between 2011 and 2013.

Mendy got his big move to Marseille that summer, while Mahrez joined then-Championship Leicester for just £450k in January 2014.

Rivaldo was 41 when he finally retired from playing at Mogi Mirim in 2015 – the club he left (as president, no less) to join Sao Paulo in January 2011. He was 38 and heading into the twilight of his career, but it didn't stop him from scoring a lovely goal on debut against Linense – one of his five in 30 games that season, as Sao Paulo finished sixth and reached the knockout stage of the Copa Sudamericana.

Casemiro was only in his second season as a professional when the Brazilian legend rocked up at the Estadio do Morumbi, and was just shy of his 19th birthday. The future Real Madrid man was a regular at the heart of midfield, however, leading to his 2012 transfer to the Spanish giants. Four Champions League titles later, it's fair to say he's done just fine.

Henry and Riise were opponents during their time in the Premier League; the former starring for Arsenal, and the latter following him to England two years later with Liverpool. The duo were once on the same side, though, having both represented Monaco in the late 1990s.

Riise arrived from Aalesund in Henry’s fifth and final professional season at the Stade Louis II, when the principality club finished fourth in France’s 1998/99 Division 1. They first played together as substitutes in a September 1998 league win over Le Havre, turning out for Jean Tigana’s star-studded Monaco side that featured the likes of Fabien Barthez, Lilian Thuram, Ludovic Giuly, David Trezeguet and, er, Salif Diao.

Henry left for Juventus midway through that season, while Riise stayed put until 2001.

Davids’ subsequent employment at Barnet makes it easy to forget just how bizarre his short stay at Selhurst Park was. Signed by George Burley in summer 2010, the former Ajax, Barcelona and Juventus midfielder made only six league appearances for Palace – most of which came at left-back – before pulling the plug on his pay-as-you-play deal.

Zaha was embarking on his first season as a professional in 2010/11 and would go on to play 44 times in all competitions, with the Eagles avoiding relegation to the third tier after Dougie Freedman replaced Burley in January.

The Premier League’s most English-sounding foreigner once shared a dressing room with Reus, who spent two-and-a-half seasons at Borussia Monchengladbach before his January 2012 switch to Borussia Dortmund. His final campaign with the Foals brought 21 goals in all competitions, which is 21 more than King managed during his brief stay at Borussia-Park.

In fairness to the Bournemouth forward, he only ever played six times for Gladbach during a curious loan move from Manchester United in 2011/12.

If Pochettino and the PSG managerial job doesn’t sound like the most natural fit for the future, it’s worth remembering that the Argentine has previous at the Parc des Princes. The former defender spent two-and-a-half years of his playing career in the French capital after arriving from Espanyol, making 95 appearances between January 2001 and summer 2003.

Pochettino was joined at the club by Ronaldinho – embarking on his first move to Europe – a few months after his arrival. The Brazilian’s stellar performances in 2001/02 and 2002/03 earned him a move to Barcelona, where he did quite alright for himself.

There’s one person we have to thank for this tremendous link-up: Graeme Souness. After lasting just four months as Torino manager before being dismissed in 1997, the Scot rocked up at Benfica and set about his British-themed recruitment drive: as well as former Doncaster, Leeds and Sheffield United striker Deane, Souey snapped up Steve Harkness, Gary Charles, Dean Saunders, Michael Thomas and Mark Pembridge to join him in Lisbon.

Deane hit a respectable seven goals in 18 league games for Benfica, but returned to England just nine months after moving to Portugal in January 1998. Goalkeeper Preud'homme was at the veteran stage of his career when he made Deane’s acquaintance – he’d enjoyed his senior debut in 1977, after all – but the Belgian still didn’t hang up his gloves until the age of 40 in 1999.

A trident of unlikeliness: former Ajax and Barcelona striker Kluivert was once team-mates with Hazard at Lille in 2007/08, and the current Chelsea forward later became colleagues with Arsenal frontman Aubameyang in northern France.

Hazard began his senior career in that aforementioned campaign, making four league appearances for lesDogues as a fresh-faced teenager. The 31-year-old Kluivert played nine more games in Ligue 1, but neither man was a regular starter in Claude Puel’s team and never actually played together at the same time.

The Dutchman retired at the end of the season, but Hazard remained at the club for four more years. He was joined by Aubameyang in 2009/10, when the Gabon international played 24 times for Lille during a loan spell from Milan.

The pair are synonymous with rival north London clubs, the former having spent a decade at Tottenham and the latter serving as Arsenal’s goalkeeper for 13 years. The duo once played together elsewhere in the capital, however, hooking up for a brief period at QPR in 1988/89.

Ardiles, who went on to enjoy a remarkably peripatetic career as a manager, initially joined Blackburn in 1988 following his departure from Spurs, before pitching up at Loftus Road for an eight-game spell a few months later. Seaman’s employment in west London spanned four years, before the future England international joined Arsenal in 1990.

Maradona was nearing the end of his career when he embarked on a single-season stint at Sevilla in 1992/93, whereas compatriot Simeone was just starting out in his.

The current Atletico Madrid manager arrived in La Liga as a 22-year-old and soon found himself in the same dressing room as Argentina’s 1986 World Cup hero, Maradona having arrived at the Ramon Sanchez Pizjuan following his return from a 15-month ban for failing a drugs test.

Suker was also part of the same Sevilla side and scored 13 of his 91 goals for the club in 1992/93. He eventually joined Real Madrid in 1996 before winning the 1998 World Cup Golden Boot.

Long before Zlatan Ibrahimovic, Frank Lampard and Andrea Pirlo moved to the United States – but some time after Pele, Johan Cruyff and Franz Beckenbauer crossed the Atlantic – Stoichkov joined MLS side Chicago Fire in 2000. The former Barcelona playmaker was then snapped up by D.C. United three years later, where he was part of the same team as future Blackburn, Tottenham and QPR centre-back Nelsen.

The Bulgarian forward scored six goals in 24 outings for the capital club, whom he represented for just a single campaign in 2003. Nelsen had already been at United for two years and stayed for another couple after Stoichkov’s exit, before signing for Blackburn in 2005.

QUIZ! Can you name the last 50 players to score for Manchester United?

Ronaldo’s goalscoring figures were consistently impressive throughout his career, but it was at PSV where he made a name for himself as a prodigiously talented striker. The Brazilian netted 54 times in 57 outings across two seasons in Eindhoven, a tally which had some of Europe’s biggest clubs queuing up for his signature.

Ronaldo ended up at Barcelona, who Gudjohnsen also represented later in his career. The pair were briefly team-mates at PSV in 1995/96, but the Icelander only played 15 matches in the Netherlands before returning to his homeland with KR Reykjavik.