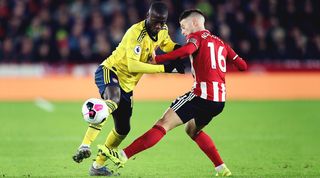 Neither Arsenal nor Sheffield United have returned from the COVID-19 break looking particularly strong.

Mikel Arteta's Gunners have had a torrid season in which they find themselves fighting for a top-half finish, but the FA Cup may provide a little respite. Arteta himself captained Arsenal to the 2014 trophy, and it's a competition that his side have enjoyed over the years - they hold more Cup wins than any other club, with 13.

For Chris Wilder though, this last-eight clash is more about getting his side back to winning ways. The Blades have had a storming season and they'll want to make sure that they don't slip much further down the table in the coming weeks - what better way to turn their form around than with a win over a big side this weekend?

Kick-off is at 1pm BST and the game is being shown on BT Sport 1, BT Sport Extra 1 and BT Sport Ultimate in the UK. See below for watching details where you are.