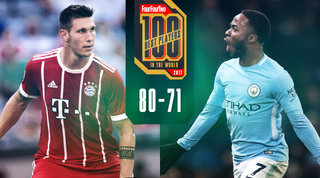 Süle's potential was obvious early, thanks to his outstanding performances under Julian Nagelsmann at Hoffenheim: his quick reading of situations and powerful edge made him ripe for Bundesliga success.

After helping Nagelsmann's side qualify for the Champions League and reaching the 100th Bundesliga game landmark, the Frankfurt-born stopper earned a five-year deal at champions Bayern Munich.

In six months, 22-year-old has become a regular under both Carlo Ancelotti and Jupp Heynckes. True, the centre-back took advantage of some key players getting injured, but since getting his chance he’s firmly established himself as captain material in the long-term – and now keeps his more senior team-mates on the outside looking in.

Eight international caps have come along, too – including a run at the Confederations Cup in Russia. At this rate he's a starting centre-back for Germany at the World Cup.

Koke averaged 37.3 final-third passes per 90 minutes during UEFA World Cup qualifying – only David Silva had a higher average throughout Europe

After Koke got injured in October, Atletico Madrid’s next results were 0-0, 1-0, 1-1, 1-1, 1-1, 1-0. Goals dried up without their chief playmaker, costing them ground in La Liga and putting their Champions League hopes in danger. They didn’t score twice in a game again until they beat Roma 2-0 in November, then hammered Levante 5-0. By that time, their Spanish talisman had returned.

Industrious and inventive, the 25-year-old keeps Atleti's midfield ticking, feeding the forwards with incisive passes to feet or over the top.

Diego Simeone's side are now finding the net again and Antoine Griezmann, who didn’t score once while Koke was sidelined, has helped himself to four goals in three games. Make of that what you will.

Highlight: In August, Koke scored a screamer and a bicycle kick to help Atletico sink Las Palmas for their first three points of the season.

Chiellini is happy to play with his head bandaged up and with blood on his shirt, so it’s perhaps unsurprising that he looks set to be the last member of the vaunted Juventus backline left standing. Andrea Barzagli is close to retirement and Leonardo Bonucci fled to Milan, but King Kong remains.

His fall down this list shows that, while he may no longer be the dynamic force he was, few strikers enjoy coming up against the 33-year-old when the whistle blows. Chiellini played an important part in Juve’s march to yet another domestic double, but he will want to forget the Champions League final – where he left Cristiano Ronaldo unmarked not once but twice – as quickly as possible.

The Bianconeri have shipped goals at an unusually high rate in 2017/18, but few would bet against them and their bruising defender rounding into form as the season progresses.

Highlight: Captain for the night as Gigi Buffon sat out, the stand-in skipper got to lift the Coppa Italia following victory over Lazio.

Arturo Vidal has won 3.3 tackles per 90 minutes, the joint-third-highest average in the Bundesliga this season

Vidal doesn't really do quiet seasons, but by his standards the last 12 months have been slightly less eventful than usual. The Bundesliga has now become a formality for the charismatic Chilean and Bayern: he perhaps stood out most with memorable performances in the Champions League against Arsenal and Real Madrid.

Although Bayern's performances have dropped around him, the amount of minutes Vidal has played have also taken their toll. Another summer tournament, in which he clocked up a further 11 international appearances for Chile, is too much football. In the end his influence couldn't carry La Roja to the 2018 World Cup, however, and he'll be watching from home.

Under Jupp Heynckes at Bayern, Vidal looks to have found some rhythm again and even managed to score in four successive Bundesliga games against Augsburg, Borussia Mönchengladbach, Hannover and Eintracht Frankfurt.

Highlight: Vidal led from the front as Chile went to the Confederations Cup final, losing to Germany in the final.

Thiago Silva has been the most accurate passer in Ligue 1 this season, completing 96.2% of his attempts

He’s now in his sixth season at PSG, but Silva has had to fight off the critics this year – the Brazilian was blamed in some quarters for PSG’s 6-1 defeat and Champions League exit at the hands of Barcelona last spring.

It’s true that on occasion he can look a little less imperious than he did in his Milan prime, or during the early part of his PSG career, but at 33 he still has plenty to offer. That PSG didn’t target a new central defender during the summer transfer window shows that his superiors are still counting on him.

Silva’s hunger for trophies remains as strong as ever: he’s driven by the genuinely realistic prospect of becoming the first PSG captain ever to lift the Champions League trophy.

Highlight: A series of brilliantly composed performances as PSG romped through the 2017/18 Champions League group stage.

Sterling has scored 9 goals in the Premier League this season, equalling his career high in a single season (set in 2013/14)

No player has benefited more from Pep Guardiola’s arrival at Manchester City than Sterling. He, like the team around him, was often guilty of inconsistency throughout 2016 and exhibited hesitancy in front of goal which badly undermined his contributions.

Not anymore: by the end of November 2017, he had already matched the best league goal tally of his career (nine) and scored back-to-back-to-back winners against Feyenoord, Huddersfield and Southampton.

But Sterling is more than just a glowing stat-line. He’s become instinctive in the penalty box and has developed the natty habit of arriving in the right place at exactly the right time - and often in the dying moments of tight games.

He is no longer just a player animated by speed and skill, but one with a maturing tactical appreciation and clear understanding for his manager’s aims and objectives.

Highlight: That November run. Goals went in off his knees, his shins and his chest but they were all critical and, most importantly, allowed him to grow his own status within a glittering City team.

Forsberg has 11 assists in the Bundesliga in 2017, four more than any other player

It's fair to say that 2017 was the year Forsberg became a household European name. With RB Leipzig pushing Bayern Munich close last season, the Swede was the obvious star attraction.

His skills, composure and goals were the catalyst for Ralph Hasenhuttl's men to join the elite group in Europe's premier club competition. After a spell out of the team, Forsberg returned to assist 13 goals in the Bundesliga in the first half of 2017.

With the eastern German side competing on three fronts this season, including the Champions League, Forsberg hasn't quite managed to deliver with the same consistency as last term – although he did manage big European goals against both Monaco and Porto. Leipzig's pressing is less intense in order to preserve some energy, but there have been enough flashes of brilliance from the attacker to suggest that 2016/17 wasn't a one-off.

Highlight: There are a bunch of devastating showings from Forsberg, including in Leipzig's 5-4 defeat to Bayern. But none can be as satisfying as Sweden's two-legged triumph over Italy to reach World Cup 2018.

Fernandinho (90.3) is one of three players who has averaged more than 80 passes per 90 minutes in the Premier League this season

Pep Guardiola rates the 32-year-old very highly, but such appreciation had its downsides at City last season: the versatile Brazilian was shifted all over the pitch, even filling in at right- and left-back.

This term, with the tactical plan much more consistent, Fernandinho only needs to do what he knows best: playing as a lone holding midfielder, the veteran provides coverage for the back four, dictates the tempo and starts many attacks with his sure-footed passing.

It wouldn’t be going too far to say that Fernandinho is to Manchester City what Sergio Busquets was to Guardiola's magical Barcelona. According to Pep, he’s one of the top three players in the world in his position. It remains to be seen whether that's enough to win a place in Brazil's line-up in the summer.

Highlight: Outshining and outsmarting N'Golo Kante in Manchester City's 1-0 at Chelsea in September.

Alex Sandro has contributed to 16 goals (6 goals, 10 assists) in Serie A since joining Juventus before the 2015/16 season. No defender has been involved in more goals in Serie A over this period

Thanks to an outstanding 2016/17 season, Alex Sandro’s name entered the conversation about the world’s finest full-backs. The left-sided operator patrolled his flank with authority to nail down a regular starting berth with Juventus and earn consistent call-ups for Brazil.

A gifted dribbler and crosser with a great engine, the 26-year-old also demonstrated his versatility, operating successfully in both four- and five-man defensive lines. His impressive displays led to serious talk of a move to Chelsea that may yet happen. Thanks to a drop-off in form he has lost his place to Kwadwo Asamoah of late, suggesting a January transfer could be on the cards.

Highlight: The Brazilian is one of the few people alive who can genuinely claim to have marked Lionel Messi out of a game. His attentive defending took away the Argentine’s space as Juventus beat Barcelona 3-0 in last season’s Champions League quarter-final first-leg clash.

Hugo Lloris has allowed 37 goals in 49 Premier League appearances (0.76 goals conceded per 90 minutes) since the start of last season

At times, 2017 has been difficult for the French stopper. A high-profile error against Sweden cost France a point in a World Cup qualifier, and his club form hasn’t been of the usual purity either.

Nevertheless, Lloris has added enough saves to his showreel this year to still be considered among the very best in his position and, kicking difficulties aside, remains an enormous asset to Mauricio Pochettino and Tottenham.

Highlight: The save from Karim Benzema in Madrid. Tottenham took heavy fire in that second half and, as he has done throughout his career in north London, Lloris produced his absolute best when his team needed him to most.