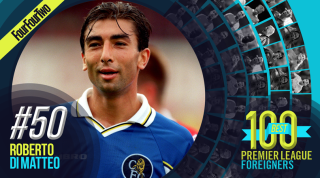 With his immaculate hair and cultured range of passing, Di Matteo was the epitome of Italian sophistication for supporters used to the rather more earthy attributes of Dennis Wise.

A record signing when he was signed by then-Chelsea boss Ruud Gullit from Lazio in the summer of 1996, Di Matteo in many ways signalled the start of a new era – not just in west London but also in the Premier League.

Then at the height of his powers, the Italian graced Stamford Bridge for six seasons, offering goals (often spectacular) from midfield and famously scoring after 42 seconds in the 1997 FA Cup final win over Middlesbrough. He retired from playing in 2002, and later guided Chelsea to an unlikely Champions League triumph as manager in 2012. RE

Solskjaer's arrival at Manchester United was such a minor event that it barely warranted a mention on Ceefax. Buried deep in the News in Brief pages, the Norwegian's signing was announced in throwaway fashion – that was, after all, the Alan Shearer summer at Old Trafford and attention was very much elsewhere.

Only once (in 2002/03) did he reach the 20-goal threshold in all competitions, but that was illustrative of the role he played at United. Yet, while he's often remembered for his interventions as a substitute, he was neither just an impact player nor a fresh pair of legs; his mental approach and ability to identify weaknesses from the sidelines, when married to his natural instinct for goal, made him lethal.

Solskjaer's career was as much a product of his mind as anything he did on the training pitch; he read the game better than most and and that's why so many of his goals came from situations where he was unmarked or surprisingly open. But he was more than just simple opportunism: he took goals efficiently, yes, but also with periodic class which has largely been forgotten. SSB

One of the under-appreciated aspects of Modric's career in England is the adjustment he had to make for it to be a success. A known quantity when he arrived from Dinamo Zagreb in 2008 thanks to his success with the Croatian national team, he nevertheless struggled under the weight of the physical burden. Juande Ramos's Tottenham were collectively dreadful, but Modric was worryingly peripheral; in those difficult early months, his suitability looked to have been horribly misjudged.

But what a response. Physical resilience developed in time and Harry Redknapp's carefree attacking beliefs amplified his talent to a level of technical accomplishment rarely seen before or since. He hardened over time, certainly, but never to the point at which it compromised the aesthetic beauty of his passing range or close control.

His sale to Real Madrid broke hearts. His behaviour in forcing the transfer left its mark and the void in the team was certainly felt, but neither was as lasting as the sense of loss at seeing such an elegant player being ripped away. Modric represented mastery of football's purest parts and remains one of the finest players to ever wear a Spurs shirt. SSB

After arriving at Highbury in August 1998 (and scoring on his debut against Manchester United), the spiky-haired Swede drifted in and out of the side, and occasionally frustrated with his inconsistent displays.

That was until the Double-winning 2001/02 campaign, that is, when for several months he was the most devastatingly effective forward in England. Linking superbly with Dennis Bergkamp, Ljungberg – complete with eye-catching red stripe through his hair – scored a glut of goals, mastering the art of latching onto the Dutchman’s slide-rule passes and slipping the ball beyond a goalkeeper.

Arsenal’s victories against Tottenham, Bolton, West Ham and Liverpool were in no small part due to Ljungberg’s marvellous anticipation and clinical finishing. A hip injury sustained while with Sweden in the 2002 World Cup sapped his subsequent effectiveness (“It took about 20% of the edge from my game,” he admitted), but he was still a potent force during the ‘Invincibles’ campaign and beyond. But the less said about his later spell with West Ham, the better. JS

A classic example of a player overcoming technical limitations with tenacity, resolve and unrelenting spirit.

A nuts-and-bolts central midfielder with vehement dedication and a magnetic attraction to a well-directed cross, Cahill was a staple of David Moyes’s Everton side that spent the best part of a decade troubling any and all opposition with a fine balance of craft and clout, skill and physicality.

Cahill, it's fair to say, was more clout than craft. If Mikel Arteta was the silk in the side, Cahill was the steel, his infectious energy and focused aggression a key component of a team that, at their best, were able to punch well above their weight. In the pre-Sheikh Mansour days, they came as close as anyone to smashing the glass ceiling that sealed off the top four. AH

What a strange story: the circumstances which led to Mascherano's arrival alongside Carlos Tevez are still contested now. One day he was a Corinthians player, the next he was standing alongside Alan Pardew with a baffled expression all over his face.

West Ham was admittedly a disaster, with Mascherano regularly being shunned in favour of Hayden Mullins (yes, really), but a loan – and eventually permanent – move to Liverpool kick-started his climb to becoming the player he is today. With hindsight and knowledge of what he would achieve at Barcelona, we know exactly why Mascherano was so effective in English midfields: he tracked the ball quite brilliantly at times, protected his defence relentlessly, and was – ultimately – smarter than almost every other player on the pitch.

His seamless transition to central defence at the Camp Nou emphasised just how easily football came to him, and his three-year cameo in the Premier League put the continent on warning. SSB

Some supporters will remember Anelka as a sulking, snarling Frenchman who moved clubs at the drop of a hat for the promise of more money. Fans at some of the six Premier League sides he played for will remember him rather differently.

The Frenchman first burst onto the scene at Arsenal as a precocious 18-year-old in a 1997/98 season that ended with the Gunners celebrating the Double. When he was heading for the door 12 months later after being snapped up by Real Madrid, there were precious few tears shed at Highbury.

He would later go on to enjoy spells with Liverpool, Manchester City, Bolton, Chelsea – where he topped the Premier League scoring charts in 2008/09 – and West Brom, without ever truly appearing content with life in the goldfish bowl that is the Premier League. He often delivered more goals than smiles but his scoring record compares favourably with many of his contemporaries. That said, the words ‘misunderstood’ and ‘under-appreciated’ probably best sum up his relationship with English football. RE

The ageless Poyet was another to traverse Chelsea’s transformation, the Uruguayan representing a reassuring and often-potent goalscoring force from midfield between 1997 and 2001. He did a similarly impressive job at Spurs before calling time on his career in 2004 aged 36.

The attacking midfielder arrived at Stamford Bridge from Real Zaragoza and immediately settled into the rhythm of both the Premier League and life in London. He won the FA Cup and the European Cup Winners’ Cup during his time at Chelsea, and also helped Spurs to the League Cup final in 2002.

He even remained potent after turning 30; in perspective, the 50 goals he netted after leaving his 20s behind dwarf the 30 scored by Ryan Giggs and 29 of Paul Scholes.

Poyet went on to manage Brighton for four seasons before an incident-packed stint as boss of Sunderland led him to stints abroad with AEK Athens, Betis and Shanghai Shenhua. RE

A smiling presence on the pitch, the Tobagonian was at times bewitching throughout the 1990s, first for Aston Villa and then for Manchester United, where his partnership with Andy Cole was a major factor in the club’s 1999 Treble triumph.

Alongside his Champions League winner’s medal, Yorke also helped United to three Premier League titles and one FA Cup, adding to the two League Cup wins he helped Villa to in 1994 and 1996.

It’s a measure of his importance to Sir Alex Ferguson’s side that it took his arrival to breathe life into Cole, who was somewhat peripheral until Yorke sidled into town. United lost just one of the 36 games the pair started in 1998/99, as Fergie’s fearsome duo delivered a staggering 53 goals.

After leaving Old Trafford, Yorke played for Blackburn, Birmingham and Sunderland, with a spell in Australia’s A-League with Sydney sandwiched in between. RE

The Frenchman was arguably on the wrong side of his career peak when he touched down at Stamford Bridge, but no one could quibble with the imperious Frenchman’s performances during his six-year spell in west London.

Almighty at Marseille and magnificent in Milan, Desailly played a full role in the Chelsea revolution between 1998 and 2004, standing tall as the club were transformed from also-rans to title contenders. Strong in the tackle and graceful whenever he ventured into midfield, Desailly was unlucky to only add an FA Cup winner’s medal (against Aston Villa in 2000) to the haul he accumulated while at the San Siro.

Like Gianfranco Zola, Gianluca Vialli and Frank Leboeuf, Desailly was an overseas player who threw himself into Premier League life – and the top flight was certainly better for it. RE