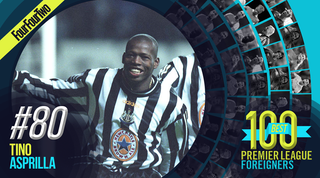 The Colombian was blamed by many for Newcastle’s failure to convert a 10-point lead into title victory in 1995/96, but the somersaulting South American never paid to much attention to the opinions of others. He did, after all, have plenty of his own.

Asprilla’s signing was supposed to be the cherry on top of Newcastle's cake, with his creative talents adding to those of Peter Beardsley and David Ginola. As it was, Asprilla was often the odd man out at St James’ Park, but life was rarely dull with him around and over two seasons in the north-east he wowed and frustrated in equal measure. RE

Memories of Kanoute’s time in England are tinged with questions of what might have been. He left for Spain feeling disenfranchised following Tottenham’s attempt to block his participation in the 2004 Africa Cup of Nations with Mali, and Spurs fans radiated frustration as the striker scored freely for Sevilla while winning consecutive UEFA Cups, knocking out his former employers in the process.

But while he’d peak elsewhere, the laid-back Kanoute was often a joy to behold in the colours of Spurs or West Ham before them, where he top-scored two years running. He had a broad range of talents – skill, speed, hold-up play, goalscoring ability in the air and on the floor – and netted nine times in his first 11 appearances for Tottenham before the relationship turned sour. HD

"Kanu is a magician," explained former Arsenal team mate Gilberto, "and sometimes I'm not sure he knows what he's going to do next with the ball."

The Nigerian with the telescopic legs was a bewitching force in the Gunners team during the early noughties, often teeing up Thierry Henry and Dennis Bergkamp with mind-boggling dummies and flicks. Many of his own Arsenal goals were also sublime, including a back-heeled volley at Middlesbrough in 1999 and a stupendous hat-trick at Stamford Bridge in his side's incredible 3-2 win.

Kanu demonstrated that there was life after Arsenal, too, netting the Wembley winner to help Portsmouth win the FA Cup in 2008. JS

Not only did the German score the final goal at the old Wembley, he also played a key role in Liverpool’s noughties revival. Signed from Newcastle in 1999, the former Bayern Munich star kept things simple in the Merseysiders' midfield and allowed those in front of him to reek merry havoc in both domestic and continental competition.

He won six major trophies with Liverpool over seven seasons, including the Champions League in 2005 and the 2001 UEFA Cup, before moving on to Manchester City and then, briefly, MK Dons. He would later manage Stockport County. RE

Yakubu's hopscotching career – which encompassed stints at Portsmouth, Middlesbrough, Everton and Blackburn, and nigh on 100 goals – often had him painted of something as a hired gun. But for those inclined to see things another way, such mid-table journeymanship has a romantic element to it, too. And besides, even as a hired gun, Yakubu rarely did anything less than a brutally efficient job.

A desperately unfortunate knee ligament injury at Everton interrupted his momentum while he was in arguably the best form of his career, and he returned looking a shell of the player he was, many fearing he'd never recover from his pace having seemingly been expunged overnight. But on he battled, dropping down a division with Leicester before returning in 2011/12 with 17 goals for a doomed, desperate Blackburn side during a heartening last hurrah in the top flight. AH

Expectations were minimal at best when a boyish-looking 5ft 6in central midfielder rocked up at Leicester to replace Esteban Cambiasso in the summer of 2015. He was, after all, greeted on his first day at training by a security guard asking him if he was lost and waiting for his parents to collect him.

But don’t judge a book and all that. Kante quickly established himself as a freakish force of nature who epitomised the rise of a Leicester team that shocked the world in 2015/16, haring around central midfield like a Duracell bunny on speed. “No matter who we're playing, we play three in midfield,” said the Foxes' former head of recruitment, Steve Walsh. “Drinkwater in the middle as a holding player, and Kante either side."

It was no exaggeration – the quiet Frenchman was a statistical phenomenon who added quiet class in possession to his all-action defensive displays. Leicester couldn’t hang on to him for more than season, though, and Chelsea are now grateful beneficiaries of his all-encompassing style. He will surely be a champion again in 2016/17 – and soar up a list like this in the years to come. JB

It’s hard to overstate the importance of Lucas Radebe to Leeds during his time at Elland Road; the talisman of South African football was the rock around which several Whites’ sides revolved.

Radebe arrived in Yorkshire from Kaizer Chiefs in 1994, and after a difficult start under Howard Wilkinson, remained at the club for over 10 years to establish himself as one of the Premier League’s most reliable centre-backs. He skippered the young side that finished fourth in 1998/99, then third a season later before 2000/01's memorable run to the Champions League semi-finals (which injury cruelly robbed him a part of, and much of his career thereafter).

The Soweto-born defender was the face of South Africa’s return to the international stage and part of the side that won the 1996 Africa Cup of Nations. He remains a true Leeds legend. RE

He should never have left Arsenal. A move to Manchester City in the summer of 2009 had obvious appeal, but his style of play was perfect for an Arsene Wenger-coached team. Instead, he joined an upwardly mobile club who were without a definitive identity at the time and whose recruitment strategy quickly rendered him a bit-part player.

His late career has fallen victim to the dreaded memes and, rather unkindly, he's become a figure of fun. At his best, though, he was a highly modern, aggressive centre-half who played as if he'd been built by Wenger from the studs up. It earned him a Premier League winner's medal in 2004 and, having missed out on Wenger's 2003 FA Cup Final team, the Ivorian was able to enjoyed the success against Manchester United in 2005's edition.

Technique, ambition and pace; before Liverpool, Celtic, and those lost City years, he really was an excellent defender. SSB

Remember how he introduced himself to the Premier League? Two goals for Fulham away to Manchester United on the opening day.

However, Saha never truly became the top-flight forward he should have been. Talent took him to England's top flight and enamoured him to Sir Alex Ferguson, but he reached double figures just twice in 13 seasons (20 goals in 2003/04 for United, 13 in 2009/10 for Everton).

His is a story of what might have been – or what should have been: Saha was a player of marvellous finesse with a scoring instinct that couldn't be coached, but that he's not higher on this list conveys just how fragile he was physically. As, of course, does his appearance record: he played more than 30 Premier League games in just one season out of those 13. SSB

As Bob Bradley's recent, ill-fated spell at Swansea demonstrated, it's still not easy to be an American in English football.

At the time of Dempsey's arrival (in 2007 from the New England Revolution), very few US outfielders had enjoyed any success on these shores. Kasey Keller, Brad Friedel, and Tim Howard had carved out careers as goalkeepers and Brian McBride had been a physical forward presence at Everton and later Fulham, but Dempsey was something of trailblazer. He wasn't the first to arrive, but he was the first to be truly respected.

In six-and-a-half years at Fulham – including a fabulously productive 2011/12 in which he netted 12 league goals – Dempsey made his claim to be the finest American to ever play in England. SSB