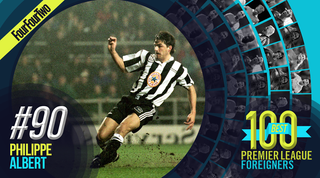 With his relaxed demeanour, elegant playing style and tremendous ’tache, the Belgian defender became a folk hero on Tyneside. His attacking forays assisted Newcastle in overloading opponents, as the Entertainers came close to ending the club’s interminable trophy drought.

But while that beautiful chipped goal to cap a 5-0 thronking of Manchester United in October 1996 deserves its regular outings on Premier League Years, Albert’s defensive qualities shouldn’t be overlooked.

He enjoyed five years with Newcastle and a loan spell at Fulham, before heading home to Belgium, where he started a new life trading fruit and veg. As you do. RE

Signed from Feyenoord as a free-scoring striker, Kuyt looked destined to be just another forward to experience cringe-inducing difficulty in turning Eredivisie goals into Premier League currency. Before he could fail as a striker, however, the Dutchman reinvented himself as a winger – or, more accurately, as an inside forward on the right of a 4-2-3-1 system that anticipated the tactical trend of the decade ahead.

Kuyt was the unsung hero of Rafa Benitez’s finely tuned Liverpool team which peaked in the 2008/09 campaign, when they lost two games all season and narrowly missed out on the title. Unsurprisingly, the Anfield faithful grew to love a player who was preposterously hard-working and had a knack of scoring in big games. AH

This particular Boateng was the kind of player loved by every fan of the clubs he represented. Seeing as the Dutchman made nearly 400 Premier League appearances for Coventry, Aston Villa, Middlesbrough and Hull, that amounts to some substantial affection – and rightly so.

While he was more than a mere ball-winner, Boateng’s defining characteristic was his tenacity in hunting down and retrieving possession. Was he the most gifted of midfielders? No. But he gave all of himself to every cause, and watching him play was often a stirring experience for the traditionalists among us. SSB

For seven years at Arsenal, the Frenchman was a model of consistency as well as the archetypal modern full-back: fast, combative in the tackle and the instigator of countless attacks. There were few finer sights at the Emirates than Sagna in full flow, his beaded braids gleaming in the sun.

He won just one trophy with Arsenal, the FA Cup in 2014, before announcing his intention to leave for Manchester City. He gradually forced his way into the reckoning there, although as he turns 34, he has in recent times had to curtail those turbo-charged runs down the right wing. JS

Nearly 20 years since Middlesbrough’s players walked out for the 1997 FA Cup Final, everybody knows exactly why their suits were so scruffy: Fabrizio Ravanelli and the notorious pre-game ruck.

In retrospect, the Italian is the perfect symbol for that season's chaos. Teesside had become an unlikely Mecca for exotic footballers in the mid-1990s, and the Italian – silver-haired but only 27 – wasted no time in making his Premier League pilgrimage, barely six weeks after scoring in the final as Juventus won the Champions League.

Assumed to be technically gifted on account of his passport, Ravanelli was actually rather English: strong and mobile, and more than equipped for the British game. And he was incredibly effective, scoring 31 goals in his only full season with Boro – including a debut hat-trick in a 3-3 draw with Liv. Even when he turned out for Derby in 2001/02, well past his best, Ravanelli notched a respectable nine times in 31 Premier League matches. SSB

The mop-haired Basque won the Champions League twice at Real Madrid, starting the 2000 final in Valencia. But things went sour when fans turned on him following a number of mistakes, and so the player Bolton signed in 2002 – initially on loan – was one horribly low on confidence.

Also lacking pace, Campo struggled as a Premier League centre-back before Sam Allardyce moved him into a holding midfield role. There the former Spain international flourished, and aided by his range of passing, Bolton turned from relegation battlers into regular contenders for a European spot.

Campo became a cult figure at Bolton, even inspiring an indie band to name themselves after him. CF

To love Carbone was to love the game – and enjoy ragingly obvious stereotypes. He arrived at Sheffield Wednesday in 1996, when the Premier League was still relatively underdeveloped and rugged Englishness was the norm. Yet here was a dainty Italian, with catwalk good looks and flowing hair, caressing the ball and playing the game with an imagination that didn’t quite belong.

His goals have stood the test of time, but Carbone’s legacy perhaps doesn't endure as it should. He’s rarely credited for being in the initial boarding party of foreign players, and he was ultimately good enough to leave an impression upon a league which tried very hard to kick him to pieces.

For over a decade, Berg was the only player to win the Premier League with two clubs (six more have now matched the feat – try to name them if you like, then check your answers at the end of this entry*). The Norwegian was a pillar of reliability for Blackburn in their 1994/95 title-winning season, and again when called upon by Manchester United during a golden period in the club’s history.

Virtually an ever-present at Ewood Park, when Berg moved to Old Trafford for £5m in 1997 it coincided with a disastrous decline in Blackburn’s fortunes. He returned as a Treble-winner and marshalled Rovers’ backline for three more seasons to show he could still do the simple things as well as any defender in the Premier League. RE

The Ghanaian arrived at Leeds with a huge reputation thanks to his goalscoring exploits with Eintracht Frankfurt – Yeboah was Bundesliga top scorer two years running in 1992/93 and 1993/94 – and he didn’t disappoint.

‘Yeboah’ became a footballing verb heard on playgrounds across the country, and his goals against Liverpool and Wimbledon in consecutive months of 1995 live long in the memory.

However, those inimitable strikes were just a snippet of the brilliance he brought to this corner of Yorkshire. He scored 32 goals, many of them breathtaking, during his two years in the Premier League, before leaving Elland Road behind to join Hamburg. It was brief, but it was special. RE

Lehmann faced a daunting task when he inherited David Seaman’s Arsenal gloves in 2003. Yet the spiky German embraced the challenge of replacing a club legend and, in his first season, turned in admirably consistent performances between the sticks as the Gunners went through the 2003/04 campaign unbeaten.

Somehow he kept a rabid Manchester United at bay in 2005 as Arsenal won the FA Cup, and helped his team keep a record-breaking 10 consecutive clean sheets in Europe. Later, after returning to Germany, Lehmann came out of retirement in 2011 to help Arsenal during an injury crisis.

He was outspoken, combustible, prone to haranguing ball boys and sent off in the 2006 Champions League Final, but he was a worthy successor to Seaman. JS