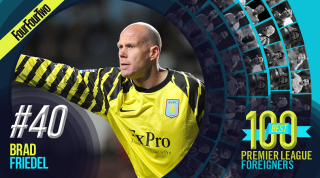 Friedel experienced some very literal resistance on his entry to English football, being denied work permits for moves to Newcastle and Sunderland before finally arriving at Liverpool in 1997. That was a trying time on the field, too, because the American was not a success at Anfield and would last just three seasons before being sold to Blackburn.

Friedel's physical resilience is often celebrated, but perhaps his emotional durability warrants equal praise: early failure has destroyed the career of many a goalkeeper and yet in his case it seemed highly instructive. He rebuilt his reputation at Ewood Park during Rovers' promotion season and spent eight successful years at the club before taking his secure hands and obstinate shot-stopping to Aston Villa and, eventually, Tottenham.

Even for a goalkeeper, his eight straight ever-present Premier League seasons between 2003 and 2012 is a remarkable achievement, testament to both his conditioning over that period and the high standards he was able to maintain. SSB

Robben's career has soared to such heights since leaving England that it's easy to forget those first exciting glimpses of him as a young player. In the present day, he's synonymous with a specific series of actions: collecting the ball on the right, cutting infield and driving into or across the penalty box.

At Chelsea that wasn't quite so; he was more of a complement to Jose Mourinho's other players than an outright match-winner. He produced individual moments, certainly, but Robben was more regularly an exclamation point on moves – see his goal against Norwich at Stamford Bridge or his first for the club in Russia against CSKA Moscow.

There were times when he looked like the perfect Mourinho component: lightning quick, direct and highly economic. He would become a better player at Real Madrid and Bayern Munich, but also a more self-indulgent one; he was never more exhilarating to watch than he was between 2004 and 2007.

Chelsea were excellent without him, but they were frequently terrifying when he was fit and available. SSB

“I bought him because of his pace and his eye for goal,” explained Arsene Wenger after securing the Dutchman’s services in summer 1997.

Like several of his new team-mates, the former Ajax winger took a few months to adjust to the vagaries of the English game. But in the new year, his stellar displays helped drive his team towards the club’s second domestic double.

Overmars served notice of his growing effectiveness in the team when he scored both goals in a confidence-boosting 2-1 home win against Leeds in January 1998; he then grabbed what was essentially a season-turning winner at Old Trafford in Arsenal’s April showdown with title rivals Manchester United, and netted twice on May Bank Holiday weekend as Arsenal clinched the league with a 4-0 win against Everton at Highbury.

Monaco midfielder Petit arrived in August 1997 after snubbing Tottenham at the last minute. The pony-tailed Frenchman initially struggled to adapt to the pace of the English game, and his and Patrick Vieira’s performances in the autumn and winter of 1997 led to suggestions that Wenger’s team lacked the mentality to win the league.

Yet after a heart-to-heart discussion with Tony Adams and Steve Bould at the ’97 Café Royal Arsenal Christmas party, Petit refocused his efforts and, in the new year, morphed into the most effective defensive midfielder in the top flight.

Tough in the tackle and an excellent passer of the ball, he and Vieira dovetailed perfectly as Arsenal accelerated towards the Double. Following a season with Barcelona, Petit returned to the Premier League for a slightly disappointing three-year stint with Chelsea in 2001. As Petit later admitted, like Overmars his best days had been in N5. JS

Hazard arrived in 2012 off the back of a French Ligue 1 championship with Lille – and via a LeBron James-esque announcement on Twitter. Courted by almost every major club in Europe, he brought his youthfu  brand of attacking-midfield play to London and has been the jewell in Chelsea's crown ever since.

Hazard periodically attracts criticism for his performances, never more so than during the dark Mourinho days of 2015/16, but he's consistently been one of the most dangerous players in the league – and, importantly, not someone who has to be playing at the top of his game to hurt an opponent. The Belgian changes matches in the blink of an eye and with a flash of his feet, with his low centre of gravity and creative finishing range being consistently more than a match for defenders in this country.

There's a caveat: Hazard is a mood player and there hasn't been much obvious progression in his game. He remains so relatively low on this list because the world has been waiting for an elevation which hasn't quite arrived. He's produced some fabulous moments and won Chelsea points all on his own, but there remains an expectation that more is to come – but also a suspicion that it might never arrive. SSB

2018 will be Kompany's testimonial year at Manchester City. That's gone quickly, hasn't it?

Like all clubs who become wealthy overnight, City's recruitment strategy was initially scattergun: in came the big wages and the suspect attitudes. Kompany predated the Abu Dhabi Group's takeover though and, reliably, the due diligence which led to his transfer was more sound: an excellent player, but also a leader of men and a captain who has continuously bound a dressing room full of egos and potential trouble.

Injuries might already have ruined him; sightings of him in the starting XI are becoming increasingly rare. Nevertheless, before his body started to fail he was among the best centre-backs in the country: reliable on the back foot but also a hugely important part of City's initial possession phases.

Tellingly, after nine years and hundreds of millions of pounds in expenditure, City are still no closer to finding a centre-back who is his equal. SSB

Not a player who often come up when the Premier League's best midfielders are discussed, yet at his peak Essien was as powerful a force as Gerrard, Lampard, Scholes or any number of more reputed greats. The problem is that his peak was so fleeting, having never truly recovered from a knee ligament injury sustained in 2009.

The truth is that for three seasons Essien, who was signed by Jose Mourinho in the summer of 2005 after Steven Gerrard U-turned on that transfer request, came as close as any midfielder to a fully-fledged Gerrard initiation: marauding runs, thundering tackles, sinewy physicality, boundless stamina and a savage shot. And – whisper it – Essien's selflessness and positional discipline might just have given him an edge on the Liverpool man, albeit only for a brief spell.

A thoroughly likeable character and scorer of one of the great goals of the modern era, Essien probably deserved to be recalled in higher esteem than he is. But his career also serves as a brutal reminder of how instantaneously crushing a bad injury can be, even to seemingly superhuman athletes. AH

Okocha's time at Bolton actually didn't begin well: he was subbed at half time in a 4-1 loss at Fulham on his debut and didn't start another game for three months. But the Nigerian had shown his quality months earlier at the 2002 World Cup and soon he would display those talents in a Bolton shirt, having arrived on a free transfer from PSG. If it seemed a surprising move, the 28-year-old was actually so keen to join the Trotters that he got in his car and drove all the way from Paris to get the deal done.

Okocha almost single-handedly rescued Bolton from relegation trouble in that first season, netting crucial long-range goals and dazzling the Premier League with a string of outrageous skills and showboats that embarrassed a host of opponents. For half a season, he wasn't far from being the best player in the league – even at Bolton.

He'd stay for a total of four years, assuming the role of captain and guiding Wanderers into Europe for the first time in their history, establishing himself as one of the club's greatest ever players. CF

On his Premier League debut against Manchester City, Evra was bullied by Trevor Sinclair, replaced at half-time and awarded a 0/10 for his performance by an opportunistic British tabloid. Over the next 378 games, however, he had the last laugh: by the time he moved to Juventus in 2014, he'd won the Premier League five times, the Champions League once and become one of the finest attacking full-backs in Europe.

Evra had a texture to him, too, and became a weightier figure in the United dressing room towards the end of Sir Alex Ferguson's career. He was part of a team which – in retrospect – relied as much on their character as their collective.

Some of that influence can still be seen today in his relationships with some of the younger France internationals, and his lasting popularity within the United fanbase – and there was even talk of him making a return to Old Trafford in January. SSB

Sami who? That was the reaction of most Liverpool fans when Hyypia fulfilled his childhood dream by joining the Reds from Dutch side Willem II in 1999. The centre-back was hardly the sort of name to set the pulses racing, but by the time he'd left Anfield a decade later, Hyypia had established himself as one of the most popular players in the club’s recent history.

Starting with a barmy UEFA Cup triumph over Alaves in 2001 – a 5-4 win for Liverpool that suggested defending wasn’t a strong point for either side – Hyypia played a central role in a succession of cup triumphs throughout the noughties. Nestled alongside Liverpool’s fabled ‘Miracle of Istanbul’ triumph over Milan in 2005, there were two FA Cup wins and a pair of League Cups.

It was a haul that saw Hyypia rival Jari Litmanen as the most popular Fin on Merseyside. RE