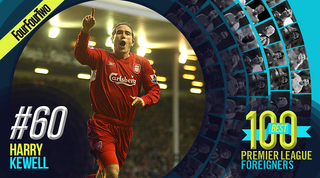 Having starred as the crown jewel in a Leeds side bursting at the seams with thrilling youngsters, Kewell's move to Liverpool in 2003 carried the expectation that he would provide the missing link between midfield and attack that could transform Gerard Houllier's promising side from contenders to conquerors.

Things didn't quite turn out that way, with his time an Anfield largely blighted by various ruinous injuries. Houllier's vision of a Harry Kewell tearing into defences alongside a peak-era Steven Gerrard and Michael Owen was, alas, to remain largely hypothetical. But his 13 years in England's top flight bore plenty of fruit – not least some truly spectacular goals – and that many will look back on his career with mild dismay is merely testament to the way he thrilled us to begin with. AH

Part of Jose Mourinho's hand luggage when he took the Chelsea job in 2004, Carvalho arrived at Stamford Bridge as a European champion and spent the next six years showing why.

The value of the transfer, other than just the recruitment of a player who Mourinho knew well, was that it created such a complementary partnership with John Terry. Carvalho was the pace, Terry was the positioning; they shared certain abilities and were each more than that single definition – Carvalho was an excellent reader of play and extremely capable in possession, too – but it was that basic contrast which made them so successful.

The duo were the foundations of a defence that shipped a barely-believable 15 goals in 2004/05, and only 47 combined in the two seasons following that. With that, there were three Premier League titles, four FA Cups, two League Cups and, after 210 largely excellent appearances, a move to Real Madrid. Not bad. SSB

As well liked for the man he is as the player he so often was: Zabaleta is modern Manchester City royalty.

The trouble with longevity is that it comes at a price. Now in his ninth season in England, the Argentine is beyond his prime and starting to labour. But, goodness, what a player he's been. The modern full-back is typically all pace and attacking threat, but Zabaleta carved his reputation from being good at almost every part of the game.

Tactically outstanding – notice how he was always in the right place at the right time – he was arguably the Premier League's finest right-back between 2012 and 2015 and the continuity he provided was integral to the functionality of both the championship-winning sides he played in. SSB

The Brazilian midfielder, who won the World Cup in 2002, etched his name into Arsenal's history books by scoring the club's fastest-ever goal (20 seconds into the Gunners' 2002 Champions League match against PSV Eindhoven), and their first at the new Emirates Stadium in 2006 against Aston Villa.

Crucially, he was the indestructible 'wall' in midfield during Arsenal's Invincibles season in 2003/2004, adept at both dropping deep to assist the back four and joining the attack. Gilberto's selfless approach – and propensity to score more than the occasional goal – was appreciated by team-mates and supporters alike. JS

Beyond his many telling contributions to Manchester United's cause, De Gea's impact on English football has been to act as perpetual caveat against shaky, youthful goalkeeping. Signed from Atletico Madrid in 2011, his staggering shot-stopping ability didn't immediately translate to the Premier League: his growth was stymied by tentative decisions and his reputation was discoloured by mistakes.

But the steepest of learning curves led the Spaniard to rare goalkeeping air: between 2013 and 2016, he was United's Player of the Year in three consecutive seasons. A worthy reward for his glittering reel of saves which, over time, will surely only broaden.

A remarkably agile keeper with an astonishing reach, he still has potential to grow into. SSB

A man with the physique of an olympic weightlifter and the face of an amateur boxer, Mark Viduka was not, at a glance, a player you would expect to exhibit much in the way of twinkle-toed technical exuberance. Finesse, though, was Viduka's standout trait.

The Australian allied the sharp-elbowed brutism of a old-fashioned centre-forward with the sort of delicate ball-control more likely found in an Argentinean enganche, and was the spearhead of David O'Leary short-lived but high-flying Leeds side, who reached a Champions League semi-final in 2001. AH

El Diego. Well, not the Diego, but a notorious one all the same. Now into his third season at Chelsea, Costa is firmly established as one of the country's finest goalscorers and also one of its pre-eminent villains: a hard-hearded forward with an eye for the net and a nose for mischief.

While he's generally detested by every rival crowd in the country, there's much to be admired in the physical leadership he offers to his club. When the acrimony rains down and the blood spits from the stands, Costa wants the ball - he thrives in the hostility. His goals (47 in 74 Premier League appearances) are of obvious value, but it's perhaps his rugged texture which makes him who he is. Costa won a league title in his first English season, suffered a curious malaise during his second, but in his third year has reached a level of bullying bastardry which surpasses anything we've seen before.

You hate him for who he is and how good he can be. Chelsea supporters love him for precisely the same reasons. SSB

A talented Australian goalkeeper named Mark who made his name in English football? What separates Schwarzer from Bosnich is more than mere longevity: while the latter indulged himself in the trappings of his profession a little too much and was gone from the game far too early, the former made over 500 hundred appearances for Middlesbrough and Fulham over a 16-year period.

He wasn't just part of the league furniture, either: winning the League Cup with Middlesbrough in 2004, saving a Robbie Fowler penalty (against Manchester City) to take the Teessiders into the UEFA Cup the following year, and being part of Fulham's improbable run to the 2010 Europa League Final.

His career wasn't spectacular and he hasn't left a thick catalogue of gravity-defying saves; he was, however, remarkably consistent and, both at the Riverside Stadium and Craven Cottage, he often showed just how good his goalkeeping technique was. And, of course, he has two winners' medals: at Chelsea and Leicester. Though not an integral part of either challenge, that he was still playing professionally when into his forties probably entitled him to the victory laps. SSB

Immortalised in song by Manchester City fans, Kinkladze remains one of the Premier League’s greatest entertainers in a team otherwise beset by relegation concerns rather than title dreams. His sole season of top-flight football for City ended with the club falling through the trapdoor to the Championship, but despite being linked with a host of clubs on the continent, the Georgian stayed at Maine Road for another two seasons.

He would later grace the English game again with Derby, but it’s for his performances and goals in the light blue half of Manchester that he's mostly remembered. RE

A player whose excellence only became truly obvious in hindsight. Gudjohnsen made his name as a nippy young striker at Bolton before joining Chelsea for a career that played out over two very distinct but equally impressive chapters.

First, he formed one half of an emphatically lethal striking partnership alongside Jimmy Floyd Hasselbaink, his pace and movement often serving as the defence-stretching decoy that engineered the space for his partner's rocket-powered strikes at goal. Then, under the rule of Jose Mourinho, Gudjohnsen was transformed into a probing midfield playmaker, earning a pair of Premier League medals before swanning off to enjoy three trophy-laden years at Barcelona.

It says much that Gudjohnsen happened to be an established player at two leading clubs at times of top-down overhaul, and yet not only survived the cull on both instances but proved an invaluable part of the revolution. AH