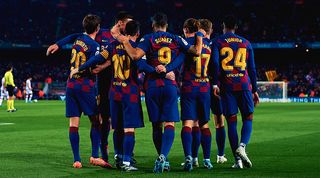 If you’ve never really watched it, now is the best time to get into La Liga. No, seriously - it is.

Spain reigned over European football in the 2010s, with five straight Champions League titles shared between Barcelona and Real Madrid, and the likes of Atletico Madrid and Sevilla ruling the Europa League.

But with Atletico, Barca and Real all in a transition of sorts now, La Liga is entering a rebirth. The glory decade is over and we’re entering a new cycle: this is the decade that will belong to Vinicius Jr, Frenkie de Jong and Joao Felix - probably.

With a lot of us still off work and unable to meet up properly - and La Liga TV having been launched relatively recently - you probably won’t get a better chance to delve into Spanish football. Here’s what to look out for in the final few weeks of the season.

It’s Real vs Barcelona for the La Liga title. Shock, horror. But it’s not a Real or a Barca that you would recognise from the last few seasons.

Ernesto Valverde’s pragmatic approach steamrollered opponents, but it didn’t project the image that Barcelona ultimately wanted, and he was relieved of duties in January.

Mid-season appointment Quique Setien wants to raise the pulse of the Nou Camp, but Barca are taking time to find their feet. The balance of the squad is delicate; Setien’s midfielders are cut from similar cloths and despite huge-money signings, the club lack attackers who truly stretch play, with their manager still testing pegs in holes, while trying to maintain club values. It’s a difficult job for anyone, especially midway through a campaign.

Which La Liga back this week, which club should you support? 🇪🇸Reply below or quote with the team you got... pic.twitter.com/TZHuZLXopWJune 10, 2020

It’s similar in the capital. This is not the Ronaldo-led Madrid side that Zinedine Zidane cultivated; Luka Modric is ageing, Federico Valverde is bone-crunching and Gareth Bale is a hate figure among Los Blancos’ ultras.

Zizou has openly admitted he’s craving another La Liga crown more than a European title: Real are pitting themselves as the Liverpool of Spain, looking to play physical football with an edge and dominate domestically before they re-claim Europe as their own.

Barcelona are on 58 points; Real 56, with the latter edging it on head-to-heads this season, which will be used to separate them if the two finish the season joint on points.

Both sides are vulnerable, yet packed with explosive talent. It’s anyone’s guess as to which way the pendulum will swing come matchday 38.

Will the Martin Braithwaite saga matter in the end?

When you put “fluent in French” on your CV and then you have to do it on your first day pic.twitter.com/XMhFT08df6February 21, 2020

In January, relegation strugglers Leganes offloaded their second-top scorer, Morrocan hitman Youssef En-Nesyri, for €20m to Sevilla. It was a begrudged decision, but one that they made safe in the knowledge that their top scorer, Martin Braithwaite, would not be sold that window.

We all know now how Barcelona left them well and truly up a certain creek, without a paddle to convert chances. However, Leganes’ injustice adds fuel to an otherwise straightforward dogfight at the foot of La Liga. Nine points separate the bottom six, with the likes of Celta Vigo and Eibar not yet safe. With the league to be played behind closed doors and no supporters to rally behind these strugglers, six-pointers at the bottom will feel like empty, neutral cup ties, with these sides digging in for dear life in the fight for survival.

Neutrals will no doubt be backing Leganes. Perhaps you’re hoping Mallorca stay up so you can combine a trip to watch La Liga next season with staying at a resort on the island. Either way, few of Europe’s other remaining leagues can offer such drama at the bottom of the table.

17-year-old Florian Wirtz scored an absolute peach at the weekend against Bayern Munich for Bayer Leverkusen. While the likes of Jadon Sancho and Alphonso Davies were talked about pre-lockdown as the biggest starlets the Bundesliga had to offer, post-COVID football has turned German football into even more of a squad game, with German coaches having five substitutions at their disposal, and the likes of Wirtz getting more minutes.

The same will likely be true of La Liga and there are fantastic talents beyond the likely suspects of Ansu Fati, Martin Odegaard and Rodrygo. Mallorca’s Takefusa Kubo - on loan from Real Madrid - has shown glimpses of his potential this season and Ander Barrenetxea from Real Sociedad is thought to be the next Antoine Griezmann; Diego Lainez at Real Betis is an exciting talent hoping for more minutes, while Real Madrid’s January signing Reinier may be blooded by Zidane in the coming weeks.

Just as in Germany, Spanish football will likely restart with a slower tempo, before ramping up towards the end of the fixtures. This is the perfect opportunity for many youngsters - who perhaps couldn’t have coped with the intensity previously - to give good accounts of themselves.

GUIDE Watch La Liga wherever you are in the world

Will Atletico fail to qualify for Europe?

Diego Simeone has almost single-handedly turned the duopoly of Spanish football into a triopoly, instating Atletico Madrid at the top table of European football and even lifting a title along the way. But all good things come to an end… right?

Just as at the Bernabeu and the Nou Camp, Atletico are having a transition season of sorts. Lucas Hernandez, Antoine Griezmann, Rodri and Diego Godin all went in a fire sale that raised an eye-watering €300m; Kieran Trippier, Mario Hermoso, Marcos Llorente and most intriguingly, the €100m+ teenager Joao Felix all stepped into the void. Thomas Partey and Saul Niguez are heavily linked with England, other linchpins are either ageing or back at the club for another spell and the precocious Felix is yet to deliver the same goods that Super Antoine so reliably offered.

You can see why they’re down in 6h. It’s not that Atletico have been bad - two legs against Liverpool proved they still have what it takes under Simeone - but a string of draws and just 31 goals scored all season looks worrying for Los Rojiblancos. Could this season be the beginning of the end for El Cholo and his army?

The best of the rest

The league is littered with talent. Villarreal, for example, have played host to the renaissance of Santi Cazorla, whose late-career blossom has seen him called up for Spain; Samuel Chukwueze is equally exciting to watch too. Nabil Fekir has been excellent in patches for Real Betis, supported by a cast including William Carvalho and Cristian Tello. Athletic Bilbao, still spearheaded by Inaki Williams went through an appalling ten-game drought, but are through to the Copa Del Rey final and won the last two games pre-lockdown.

These are just the sides breathing down the necks of those in European spots. Real Sociedad have been mesmerising at times, led by the youth of Mikel Oyarzabal, Alexander Isak and Martin Odegaard ahead of experience in the likes of Nacho Monreal and Asier Illarramendi. Sevilla’s rejuvenated team of transfer chief Monchi - back from Roma - and Julen Lopetegui - sacked from Spain and Real Madrid - have turned over most of the squad, bringing in a new-look side: they sit third.

Surprise package Getafe have forged a defence from the likes of La Masia reject Marc Cucurella, weathered lower-La Liga centre back Damian Suarez and Watford has-been Allan Nyom: they’ve lost three times at home all season and are looking forward to playing Inter Milan when Europa League returns, having slain Ajax in the previous round.

At the top, bottom and in the middle, this is the most open and expansive La Liga has been for years. 'Anything can happen' is a cliche, but Spanish fans have certainly been treated to the unexpected so far this season.