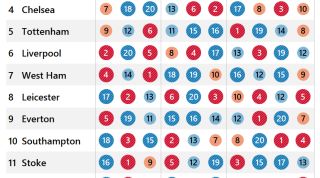 With Euro 2016 but a distant speck in the rearview mirror, focuses have quickly shifted back onto the new Premier League campaign that kicks off on August 13.

But who's got the best shot of making a strong start, and establishing the pace? Mind you, the first 10 matches are only a small indicator: last season's champions Leicester were 5th despite being beaten only once, three points behind joint-leaders Manchester City and Arsenal.

Claudio Ranieri's side seem like a good place to start here, because they'll have to hit the ground running again – five of their first 10 games are against likely title challengers, so unless they pick up where they left off last season then their defence could start as badly as Chelsea's did a year ago.

Arsenal, Manchester City and Tottenham might be early pace-setters, as they each only play probable two title rivals in their first 10 games (Manchester United and Chelsea play three; Liverpool four). Once Everton get their opening game against Spurs out of the way, meanwhile, Ronald Koeman has a nicer run of six matches before the next big test, so has the chance to make a good first impression.

Newly promoted Hull's start looks horrific: four of their first seven games are against title challengers, but Middlesbrough have been handed a much gentler return to the top flight.

Watford also have a horrible opening, with all of their first five games against clubs expected to finish in the top half – though the next five look a lot less scary. Judge for yourself...