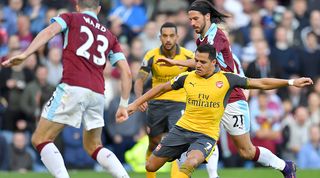 In a scrappy game that was inevitably defined by two Belgian strikers, Phil Jagielka did extremely well to emerge with better aerial duel statistics than Christian Benteke (9/19). Most people had predicted that the key battle would be between Ashley Williams and Benteke, but Alan Pardew identified Jagielka as the weaker defender and instructed his striker to hover towards the Englishman.

Jagielka stood up to the test admirably. Palace played 68 long balls and attempted 27 crosses (more than any other Premier League team this weekend) but Ronald Koeman’s two centre-backs were dominant. Benteke’s goal – a fabulous header – was only possible because the Belgian had drifted onto Seamus Coleman at the back post in order to avoid Jagielka.

He and Williams are already forming a formidable partnership at the back, and are a big reason why Koeman’s side have the second-best defensive record in the division. Jagielka also topped the charts for the most clearances (15/15).

Arsenal were fortunate to leave Turf Moor with all three points after their predictable build-up play was handled expertly by Burnley’s stubborn defensive block. Sean Dyche’s team defended in an ultra-narrow formation, and Arsene Wenger didn’t adjust his tactics to work around it.

Alexis Sanchez created eight chances as the most advanced player on the pitch. Burnley knew that Arsenal would attempt to build in the No.10 area, and therefore the visitors should have tried a more varied tactical approach; using a false nine, who vacates the traditional No.9 space to add an extra body in attacking midfield, was a strange choice given the circumstances.

Despite Santi Cazorla and Mesut Ozil dominating the ball – Cazorla topped the charts this week for most touches (114) and most passes (102), while Ozil recorded the most passes in the attacking third (39) – Arsenal only had three shots on target all match. Injuries to Olivier Giroud and Lucas Perez may have limited Wenger’s options, but he could have done more to vary their play.

As usual, Crystal Palace focused on long-ball counter-attacks down the flanks at Goodison Park. Wilfried Zaha proved very difficult to defend against from the right, largely because Yannick Bolasie (zero tackles, zero interceptions) reneged on defensive responsibilities to leave Bryan Oviedo one-on-one with the English winger.

However, Zaha was largely ineffective thanks to Everton’s possession dominance (57%). He often found himself isolated after wriggling past three or four players, with Benteke the only team-mate near him in the Everton half. He was also the most fouled player of the weekend, relieving his team from pressure by winning six free-kicks.

That Manchester City had to do so much defensive work is testament to Tottenham’s superb attacking performance. The main reason for this was that Mauricio Pochettino’s team pressed very high, unsettling the City defenders until they gave the ball away in dangerous areas and then attacking the spaces aggressively.

Moussa Sissoko, Son Heung-min, Dele Alli and Christian Eriksen swarmed similar spaces in central attacking midfield, and often received the ball behind Fernando – City’s deepest midfielder. The Brazilian had a very poor game; he was unable to track the movement of these four players, which resulted in a large gap opening up between the centre-backs and midfield.

But more impressive was the collective pressing from Tottenham’s forwards. They attempted 17 tackles in the Man City half, which caused Pep Guardiola’s team to lose the ball and their shape. Fernandinho and David Silva would push on into the Spurs half, only to leave Fernando all alone as the hosts nicked possession and drove through the middle.

Southampton were always likely to win the possession battle at the King Power Stadium, but it is cause for concern that Leicester persisted with their flat 4-4-2 shape against this kind of opposition. Oriol Romeu recovered the ball repeatedly in central midfield because the visitors had swarmed this area with bodies.

Leicester only made one tackle and zero interceptions in the central midfield area, as Pierre-Emile Hojbjerg, Steven Davis and Romeu overwhelmed Danny Drinkwater and Daniel Amartey. Claudio Ranieri could consistently use just two central midfielders last season because N’Golo Kante covered so much ground. He may have to change tact sooner rather than later.

But Leicester’s formation should not detract attention away from Romeu, who had another outstanding game for Southampton (five tackles, two interceptions).

This was perhaps Ibrahimovic’s worst performance to date in a Manchester United shirt, and although he was still relatively effective (four shots on target) his positional play was a big factor in United’s inability to break Stoke down.

The main reason why the Swede frequently lost possession was that he kept dropping extremely deep to link up play, almost like a false nine at times. This meant that United didn’t have a fulcrum to build their attacks around and made their possession somewhat aimless (Ibrahimovic only had 11 touches of the ball in the Stoke penalty area).

It was the kind of static, unconvincing performance that you might expect from a 35-year-old who is playing twice a week, and asks serious questions about his long-term viability as their leading man.

As Vincent Janssen continues to adapt to English football, Son has emerged as the perfect back-up option to the injured Harry Kane. The South Korea international was exceptional again on Sunday, creating the second goal and terrorising the Man City defence with his movement.

Why Christian Eriksen is Tottenham's most underrated star

He was caught offside five times, which is evidence of how consistently he made runs off the shoulder of the last defender. This movement was a crucial component of the Spurs attack because it forced the defenders to drop back (in order to track his runs) while Sissoko and Alli drove towards the penalty area.

It was yet more evidence that Pochettino has the squad depth to challenge Guardiola’s team for the title this season.