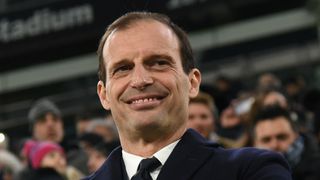 Massimiliano Allegri has rejected claims he could leave Juventus at the end of the season, insisting he is focused on the remaining two years of his contract in Turin.

With Antonio Conte's future at Chelsea uncertain and Zinedine Zidane under pressure at Real Madrid, Allegri has emerged as a frontrunner for both roles.

Conte lifted the Premier League trophy in his first season in England, but their title defence already looks over with the Blues 15 points behind league leaders Manchester City after 24 games.

Meanwhile, Madrid's shock Copa del Rey exit to Leganes has brought further scrutiny to Zidane's tenure at the Santiago Bernabeu, with his side 19 points adrift of LaLiga leaders Barcelona.

That has led to Allegri's name being heavily linked with both roles, as well as the position at Paris Saint-Germain, but the 50-year-old is in no hurry to leave the Allianz Stadium.

Speaking a news conference ahead of Saturday's Serie A clash with Chievo, Allegri said: "I always say that the less you think the better it is.

"I'm managing a top side and I have a contract here until 2020. I'm happy at Juventus, so at the moment there is no news."

Allegri is also pleased with the form of Gonzalo Higuain, despite the Argentine striker enduring a run of two goals in 11 appearances in all competitions.

Higuain's dry spell has seen him fail to score in his last five outings, but Allegri is happy with his all-round displays and expects him to end his drought soon.

"Higuain works really hard for the rest of the team," he added. "He's had his chances in recent games and will get back among the goals soon."