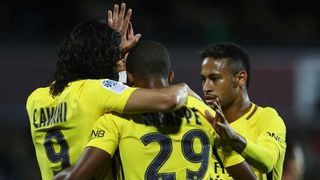 A little over three months have passed since Real Madrid made surprisingly light work of Juventus in a 4-1 win to lift the Champions League trophy for a record 12th time and become the first team to successfully defend their crown in the modern era.

Madrid will have to wait until Wednesday to begin their campaign, but runners-up Juve are among those in action on Tuesday, and things are not going to be much easier for Massimiliano Allegri's men as they head to Barcelona in arguably the game of the round - a repeat of last season's semi-final.

Europa League champions Manchester United make their return to the competition after a year out, as do their Premier League rivals Chelsea, with Basel and Azerbaijani newcomers Qarabag their respective visitors.

Meanwhile, Paris Saint-Germain will unleash Neymar and Kylian Mbappe for the first time in Europe as they travel to Celtic.

Using Opta data, we take a look at some of the best stats ahead of the opening group games on Tuesday.

- Benfica have not made it any further than the quarter-finals of the Champions League since 1992-93.
- Benfica and CSKA Moscow's only previous encounter was in the last 32 of the 2004-05 UEFA Cup. The Russian side progressed thanks to a 2-0 home win and 1-1 draw in Lisbon; they went on to lift the trophy later that season.
- CSKA are making their 11th Champions League appearance – their fifth in a row. That is the second most for a Russian side after Spartak Moscow (12).
- CSKA are winless in their last 10 Champions League games (D4 L6), equaling their longest run without a victory in the competition. Away from home, they have lost 11 of their last 13 Champions League games (W1 D1).
- This is Viktor Goncharenko's fourth Champions League campaign as manager, after three previous appearances with BATE Borisov. He was the first manager to lead a Belarusian team into the group stages of the competition.

- Basel are unbeaten against United at Old Trafford, having drawn their two trips to North-West England (1-1 in March 2003, 3-3 in September 2011).
- United have reached the knockout stages in 16 of their previous 20 Champions League appearances; however they have not made it past the group stages since 2013-14.
- Basel are winless in their last 10 Champions League games (D4 L6), their longest drought in the competition. They have also not scored more than one goal in those 10 games.
- Jose Mourinho is taking part in the Champions League with a fifth different club after Porto, Chelsea, Inter Milan and Real Madrid. Only Carlo Ancelotti (7), Rafael Benitez and Claudio Ranieri (6) have taken charge of more clubs in the competition.
- Paul Pogba has only scored two goals in 32 Champions League games.

- PSG have not progressed further than the quarter-finals in the last five seasons. Their best performance to date is a semi-final in 1994-95 when they were eliminated by AC Milan.
- Neymar has delivered 12 assists over the last two seasons of the Champions League, three more than any other player (Cristiano Ronaldo, 9). He has also had a hand in 10 goals (four goals, six assists) in four Champions League games versus Celtic.
- Dani Alves has more goals (10) and more assists (25) than any other full-back in the Champions League since his debut with Sevilla in 2007-08. He is the second Brazilian to have played in 100 games in the competition after Roberto Carlos.
- Brendan Rodgers has won only one of his 12 group games as manager in the Champions League, with that sole victory coming against Ludogorets (2-1) in September 2014 when he was in charge of Liverpool.
- Celtic have won only one of their last 14 Champions League games (D3 L10), this came in October 2013 against Ajax.

have met French sides in all three of the recognised European tournaments. Looking forward to tomorrow night, Celts?  September 11, 2017

- This is the first ever competitive encounter between Chelsea and Qarabag. In fact, the only previous meeting between English and Azerbaijani sides saw Tottenham face Qarabag in the 2015/16 Europa League group stages; Spurs won both games (3-1 at home, 1-0 in Baku).
- Qarabag are the only team, alongside RB Leipzig, to make their Champions League debut this season. They are also the first team from Azerbaijan to reach the group stages of the competition.
- Eden Hazard has scored only one goal in his last 12 Champions League games, it was from the penalty spot.
- This is Antonio Conte's third Champions League campaign as manager. His best performance was in 2012-13 when he reached the quarter-finals with Juventus.
- Chelsea have lost only one of their last 13 Champions League group games (W9 D3), away against Porto in September 2015 (1-2). The Blues have also scored in each of their last 24 group games at Stamford Bridge.