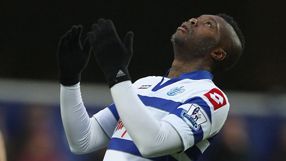 The 31-year-old has made 21 appearances for the West London club in all competitions this season, scoring four goals. He helped QPR avoid relegation last season with six goals in eight games but was also sent off twice.

Al Gharafa are managed by Frenchman Alain Perrin, who managed Portsmouth in 2005 following the departure of current QPR boss Harry Redknapp in late 2004.

Cisse joined QPR from Lazio a year ago on a two-and-a-half-year deal when Redknapp's predecessor Mark Hughes was in charge.