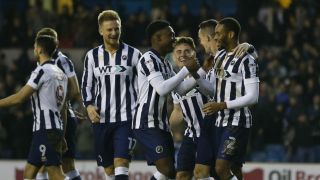 The FA Cup third round is one of the most keenly anticipated dates in the English footballing calendar. As is customary, it proved a day some will long cherish as others aim to forget it in a hurry.

Manchester United got the Saturday action underway with a 4-0 thumping of Championship Reading, with Wayne Rooney opening the scoring at Old Trafford to pull level with Bobby Charlton's all-time record of 249 goals for the club.

United's neighbours City had been in similarly rampant mood on Friday evening as they tore West Ham apart 5-0 at London Stadium, although Slaven Bilic was not the only top-flight manager to reflect on a woeful cup weekend.

Stoke City manager Mark Hughes restored the likes of Bojan Krkic and Giannelli Imbula to his starting line-up, only to haul them off at half-time as Wolves left the bet365 Stadium with a 2-0 win.

The spirit of the : Stoke stewards filmed crowd surfing with Wolves fans at the Britannia January 7, 2017

Helder Costa opened the scoring after 29 minutes and Matt Doherty secured the win with 10 minutes to go.

Millwall were plunged into turmoil this week when it emerged Lewisham Council's plan to compulsorily purchase land surrounding The Den may force the club to leave its home ground.

But the League One side had some cup magic to cheer as Steve Morison, Shaun Cummings and substitute Shane Ferguson scored to sink a much-changed Bournemouth side 3-0.

0-3 - Bournemouth are the first PL team to lose an away FA Cup match by three goals to a side from the third tier or below. Cherry-picked.January 7, 2017

West Brom were the third Premier League team to lose against opposition from outside the top tier as Steve McClaren's Derby County scored twice in four second-half minutes through Darren Bent and Tom Ince to secure a 2-1 comeback triumph.

PACKED AT BARROW, PLENTY OF ROOM AT HULL

Home advantage can play a vital role when teams are looking to battle through a tricky cup tie, and Hull City and Barrow certainly had contrasting experiences of support on their own patches in round three.

Dissatisfaction with owners the Allam family prompted a vast numbers of Hull fans to boycott the KCOM Stadium for the visit of Swansea City, although newly installed head coach Marco Silva could at least enjoy Abel Hernandez puncturing a surreal atmosphere with a 78th-minute opener before youngster Josh Tymon made it 2-0 in stoppage time.

There were 6,608 voices echoing around the cavernous Premier League ground, cutting a contrast with the 4,414 that turned out for Barrow against Rochdale – bang on the capacity for Holker Street, although Rochdale emerged with a 2-0 win on account of Ian Henderson's brace.

MINNOWS STOURBRIDGE BROUGHT DOWN BY BEAST

Barrow were not the only non-league team to see their cup adventure end.

Seventh-tier Stourbridge were the lowest-ranked team in the competition, but David fell to a Goliath of sorts. The Northern Premier League side were on course for a replay against League Two Wycombe Wanderers after Dan Scarr cancelled out an early second-half goal from Sam Wood.

There were no victories outside the top four divisions. Lincoln City and Sutton United earned replays against Ipswich Town and AFC Wimbledon respectively, although Eastleigh were put to the sword 5-1 at Brentford.

Sam Allardyce was unable to claim victory on his return to former club Bolton Wanderers with Crystal Palace. That 0-0 draw may live slightly longer in the memory than a dour stalemate at the Stadium of Light between Sunderland and Burnley, with neither team likely to be delighted by the prospect of a replay.

Southampton must host Norwich City at St Mary's after conceding a stoppage-time equaliser from Steven Naismith, while there were no such alarms for Watford as they overcame Championship opposition in the form of Burton Albion 2-0.

Everton appeared in total command at Goodison Park but Premier League champions Leicester City – without an away win domestically all season – stormed back as Ahmed Musa's quickfire double overhauled Romelu Lukaku's 12th of the season.