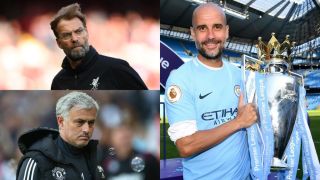 Pep Guardiola's decision to sign a two-year contract extension at Manchester City, tying him to the club until 2020-21, was interpreted by many as a statement of dynasty-building intent from the previously itinerant Catalan coach.

After four years in charge of Barcelona's first team and in contrast to an efficient three-year stay at Bayern Munich, Guardiola will have been at the helm at the Etihad Stadium for five campaigns if he sees out the duration of the new deal announced on Thursday, which could yet be extended further.

Some suggested his unprecedented display of long-term commitment sounded the death knell for competitiveness in England's top flight, such was the champions' inevitable, infallible dominance in marching to the title this season.

But by throwing down the gauntlet to well-equipped and hungry heavyweight rivals, Guardiola's attempt to write the most glorious chapter in City's history could yet propel the Premier League into its third golden era.

Here, we examine the previous two high watermarks of competitiveness and standard of play from 1992-93 onwards, before examining the prospect of a new entry glimpsed just over the horizon…

Manchester United's initial battles with Aston Villa, Blackburn Rovers and Newcastle United offered thrills and spills aplenty, but it took the arrival of Arsene Wenger and his continental revolution in scouting, diet, fitness and tactics to create a lasting, iconic rivalry between northern powerhouse United and metropolitan aristocrats Arsenal.

The Gunners gave Fergie's side a rude awakening in 1997-98 and struck again in 2001-02, before their crowning glory arrived in the 2003-04 'Invicibles' season, while the challenge on offer from Highbury spurred the Red Devils to the glory of the claiming the treble in 1998-99, a feat that remains unmatched before or since by an English club.

Mourinho's Chelsea and Liverpool under Benitez join the fray

Roman Abramovich's wealth, married with Jose Mourinho's tactical acumen and will to win, disrupted the straight fight between United and Arsenal, as Chelsea won successive titles in 2004-05 and 2005-06, before United emphatically returned fire.

Liverpool made their presence felt with Rafael Benitez at the helm, the Reds winning the Champions League in 2005 and narrowly missing out on the league title in 2008-09, as England's 'big four' dominated at home and abroad.

That sustained period of excellence effectively ended with Chelsea's Champions League triumph in 2011-12, and a spell in the relative European wilderness has been reflected by an absence of dominance at home, characterised by United's decline following Ferguson's retirement, Arsenal's descent to mediocrity late in Wenger's reign and, most surprisingly, Leicester City's inexplicable title triumph in 2015-16.

If Guardiola is indeed intent on world domination, two teams pose as the most likely challengers. Antonio Conte is reportedly set to depart an increasingly underinvested Chelsea and Arsenal are entering a brave new post-Wenger world, leaving those two London sides as unknown factors.

Tottenham have struggled to build on their gains of recent times, but may be better equipped to do so upon taking possession of their new stadium, provided they can keep hold of Mauricio Pochettino and Harry Kane.

It is Liverpool, this season's Champions League finalists under Jurgen Klopp, and Mourinho's Manchester United, Premier League runners-up to City, who are perhaps best placed to derail or at least delay City's quest for pre-eminence.

The Reds have produced some blistering attacking football, thanks in no small part to Mohamed Salah's goalscoring exploits, and must now find the consistency to capitalise on their swashbuckling style.

Mourinho faces a contrasting dilemma - the Portuguese must go against his instincts and let the shackles off sufficiently to appease the Old Trafford faithful and unleash the potential of an expensively assembled and undeniably talented squad.

If those requirements are met in Stretford and the red half of Stanley Park respectively, we could be set for a titanic three-way tussle that spurs the Premier League on to giddy new heights.