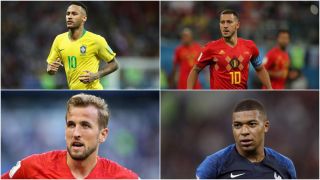 But Los Blancos will waste little time in finding someone to step into the sizeable boots left vacant by Ronaldo's €100million move to Serie A champions Juventus.

Few clubs can match the prestige of playing for Madrid, who have won the Champions League in four of the past five seasons, so there is sure to be a lengthy queue ready to take the mantle.

Below we take a look at the most likely candidates.

Perhaps the most obvious contender is Chelsea's Eden Hazard, whose star is sure to have risen following a fine World Cup in Belgium's semi-final run. The 27-year-old is one of the best players in world football and a move to the Santiago Bernabeu may assuage his desire to win the Champions League. With only two years left on his contract and Hazard describing Real Madrid as "everyone's dream" there is every possibility he swaps blue for white.

Brazil's flamboyant forward Neymar became the most expensive player in history when he swapped Barcelona for Paris Saint-Germain in a €222m deal last August. However, there have been constant rumblings that his stay in the French capital will be a short one with Madrid heavily rumoured to be his favoured destination. Earlier this month, Madrid denied having launched a lucrative bid to entice Neymar back to Spain, but the sale of Ronaldo may have changed the landscape.

Exciting France teenager Kylian Mbappe has also been the subject of speculation that Madrid were officially forced to deny. Mbappe moved to PSG on loan from Monaco last season in a deal that will become official, but that has done nothing to pour cold water on suggestions Los Blancos will move for the pacy forward, who has starred for Les Bleus in Russia. At just 19, Mbappe would represent a long-term option who Madrid can build a team around.

15 - Kylian Mbappé attempted 15 dribbles against Belgium (7 completed), highest tally for a French player in a World Cup match since Opta analyses the competition (since 1966). Hook. July 10, 2018

Tottenham fans love to laud the fact that Harry Kane is "one of our own" and certainly there seems to be little desire for a move. But Kane is the leading candidate to win the Golden Boot having starred for England at the World Cup, registered 30 Premier League goals in a season for the first time, and outscored Ronaldo and Lionel Messi in 2017. Plus, with Spurs failing to win silverware under Mauricio Pochettino could England's captain start getting itchy feet?

Bayern Munich's prolific striker Robert Lewandowski has long-since been linked with Real Madrid and may be the most like-for-like replacement available to Ronaldo. Talk of a switch to the Spanish capital has died down in recent weeks, but with money available and new signings needed there is every chance that Lewandowski could once again enter the fray.

Mohamed Salah may have just signed a new long-term contract at Liverpool but, following a debut season that returned 44 goals in all competitions and a run to the Champions League final, that little sticking point may be overlooked. Reds team-mate Sadio Mane is also a rumoured target, with some suggesting Marco Asensio could head to Anfield in the opposite direction. Another name mentioned, albeit one that may not be big enough yet to satisfy a demanding Bernabeu crowd, is Inter captain Mauro Icardi. The Argentina striker, who has reportedly interested Madrid in the past, may be persuaded to stay in Milan following the Nerrazzuri's Champions League qualification, but if Los Blancos come calling it would leave a tough dilemma.