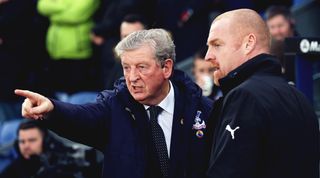 Mutterings continue at Turf Moor regarding Sean Dyche's alleged friction with the board behind the scenes - so a win tonight for Burnley would go a long way to silencing some of the rumours.

Crystal Palace will be a stern test, however. Roy Hodgson's team have been excellent this season and will be looking to bounce back after a 4-0 drubbing at Anfield. This is the first time that Palace will have played at home following lockdown.

Kick-off is at 8pm BST and the game is being shown on Amazon Prime in the UK. See below for watching details where you are.

How can I watch Amazon Prime on my TV?

Amazon's own Fire TV Stick is the best way to watch Amazon Prime. The remaining games this season are free - so you won't need a Prime account to watch - but if you do fancy getting yourself Prime, you can check out the other football content they have on offer, such as Manchester City's All Or Nothing documentary. Oh, and there's faster delivery on items you deliver on Amazon, too.

If you're more of an Apple fiend, then the Apple TV has the Prime app. Of course, there is the option too of simply connecting an HDMI cable to your telly from your laptop.

GET BT SPORT, SKY SPORTS AND BBC ON NOW TV

24 months
£2.69
/mth
12 months
£5.38
/mth
1 month
£9.20
/mth
Visit Site
at NordVPN
Quality mobile and desktop clients
Up to six connections and value pricing
Great performance in our tests
Not the best user experience at all times
Some historic security breaches