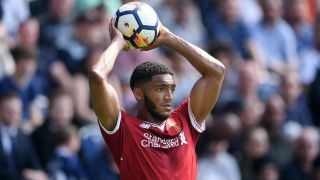 Liverpool defender Joe Gomez has been ruled out of the Champions League final and the World Cup after undergoing ankle surgery.

The 20-year-old aggravated an existing injury in the recent 0-0 draw with Stoke City, and the problem will force him to miss the showpiece clash with Real Madrid in Kiev on May 26.

He originally sustained the issue in England's friendly win over Netherlands in March, having started on the right side of a three-man defence.

Gareth Southgate looked to have earmarked the versatile former Charlton Athletic player for a role in Russia but Gomez has been ruled out of the tournament.

It comes as another frustrating setback after he missed much of last season with an anterior cruciate ligament injury.

He joins fellow England international Alex Oxlade-Chamberlain in missing the Champions League final and World Cup, while Emre Can remains under a cloud for the decider against Madrid due to a back complaint.

According to a statement released by Liverpool on Tuesday, Gomez should be ready to take part in Liverpool's pre-season preparations in July.