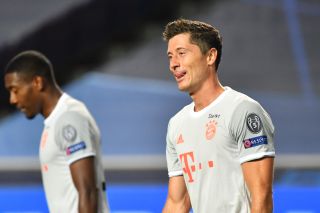 The second France vs Germany semi-final of the week sees Lyon take on Bayern Munich for a place in Sunday's final. PSG lie in wait after dispatching RB Leipzig 3-0 on Tuesday evening.

Lyon have been the surprise package of the Champions League so far, eliminating Manchester City in the quarter-finals in convincing fashion. Bayern Munich will be an even tougher task, however.

Hansi Flick's side are on course for a treble, having already secured the Bundesliga and DFB-Pokal titles during the domestic season. They're the form team in Europe and, in Robert Lewandowski, probably boast the best player in the world in current form. Expect plenty of goals in this clash.

Convinced that Bayern are going to breeze into the final, or that Lyon are going to set up an all-French affair? This Win Probability Widget below will give you an idea who who punters are putting their money behind – and at the time of writing, it's very much one way traffic...

LATEST ODDS ON LYON VS BAYERN