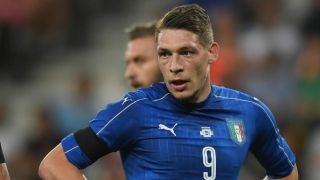 Andrea Belotti wants to stay at Torino and might refuse to leave even if a team meets his €100m release clause, according to club president Urbano Cairo.

Torino forward Belotti burst into spotlight last season, scoring 26 Serie A goals for Torino and catching the attention of some of world football's biggest clubs.

The 23-year-old has most recently been linked with AC Milan and Manchester United, while Arsenal, Chelsea and Inter are among the other clubs rumoured to be pondering a swoop.

Belotti's contract in Turin – which was signed last December - includes a €100million release clause for foreign clubs, but Cairo insisted this week that he has gone into the close-season intending to keep Belotti.

And the Toro chief has now insisted the striker himself is eager to stay and thinks his prized asset could even opt to reject a lucrative move if a top club activates his exit clause.

"I care about Belotti and I'm keeping hold of him," Cairo said to Radio 24.

"The most important thing is what he wants, regardless of the release clause, and I believe he wants to stay.

"We are trying to build the best possible team at Toro. Belotti is busy on international duty at the moment and then he is getting married on Thursday – he invited me."

Belotti is in Italy's squad to face Liechtenstein in World Cup qualifying later on Sunday.