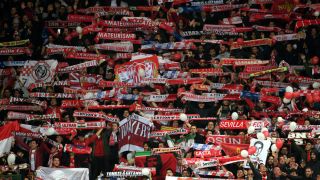 Sevilla have confirmed they will contact UEFA over Manchester United's sudden ticket price increase and the English team's failure to make five per cent of Old Trafford available to away fans.

Tensions between the two clubs rose on Wednesday when United revealed in an email to supporters that they were to increase the price of tickets for Sevilla fans by £35 to £89 for their Champions League round-of-16 second leg at Old Trafford in March.

That move came after United and Sevilla failed to reach a compromise regarding the Spanish club's decision to charge away supporters £89 to attend the first leg at the Ramon Sanchez Pizjuan on February 21.

United's correspondence also revealed they plan to subsidise £35 towards their travelling fans' tickets to bring the cost down to £54, the figure Liverpool supporters paid in the group stage.

Sevilla responded in a similar fashion and will subsidise tickets of club members to bring costs back in line with United's initial demands, though the Andalusians are angry they have only been given a 4.1 per cent allocation, rather than their entitled five per cent.

A club statement read: "Last week Sevilla FC applied for the full allocation of tickets offered by Manchester United for the second leg of the round of 16 Champions League tie at Old Trafford.

"Owing to questions of security, the Premier League club did not act in accordance with UEFA regulations - which dictate 5 per cent of the stadium's capacity (3,800 seats in this case) should be made available to the visiting club - when ticket prices were announced midway through December.

"Sevilla FC duly communicated the fixed prices and seat allocation for travelling fans to Manchester United. On the basis of this, Sevilla FC made the formal application for away tickets on the 2nd of January.

"Though attempts have been made to reach an agreement on fixed prices for tickets, this was ultimately not possible. For that reason, Sevilla FC will maintain the duly communicated ticket prices.

"Sevilla FC will subsidise the price increase for club members travelling to Manchester for said fixture. With this subsidy, the club will guarantee that no club members pay more than the €60 initially specified.

"Sevilla will be in contact with UEFA over both Manchester United's failure to make 5 per cent of tickets available to away fans, as well as the club's price increase after a formal application for an away allocation.

"Sevilla will also look to guarantee that no Sevillista pays a penny more than any Manchester United fan for similar tickets - as competition regulations dictate."