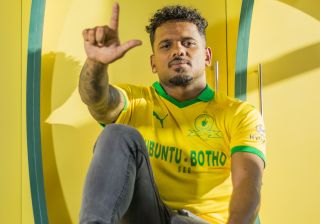 Mamelodi Sundowns have continued to strengthen their squad by confirming the signing of striker Kermit Erasmus from Cape Town City.

The 30-year-old was recently heavily linked with a possible move to the Brazilians, but Sundowns have since put the rumours to bed after the striker penned a three-year contract at Chloorkop.

Erasmus, who bagged 14 goals in 27 appearances across all competitions for the Citizens last season, now become Sundowns' latest signings ahead of the 2020-21 season.

Speaking on his move to Sundowns, Erasmus said: 'I'm finally happy to be here at such a historic club as Mamelodi Sundowns. It's a big step for me to take, it's very challenging to be apart of a club like this and I'm ready for the challenge.

'Hopefully, I can contribute to the teams positively and the fans can enjoy watching us play.

'It's a step for me in the right direction in my career and for me and hopefully, I can contribute to the team and we can make the most of the new season.'

Sundowns, meanwhile released the following statement on the capture of Erasmus:

'Kermit Erasmus has joined Mamelodi Sundowns on a three year deal with a one year option.'

'The Bafana Bafana international joins Masandawana from Cape Town City. The Port Elizabeth born had a great season with the Citizens scoring fourteen goals in all competitions. His addition will help bolster the attacking department going into the new 2020/21 season.

'The stocky built striker comes with a wealth of experience as he has played in France, Holland and Sweden. Erasmus has also represented the national team from junior levels till Bafana Bafana.