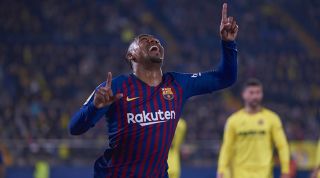 The Mirror says Arsenal are refusing to give up on signing Wilfried Zaha and are preparing a player-plus-cash bid. Unai Emery has already seen the club’s opening £40 milion approach rejected, with Crystal Palace demanding twice that. The Gunners will get nowhere near that figure but are now discussing putting players into the deal, with Calum Chambers, Carl Jenkinson and Mohamed Elneny all possible makeweights.

In related news, Arsenal are looking to hijack Everton’s £31.5m move for Barcelona winger Malcom, according to The Sun. Arsenal boss Unai Emery has reportedly identified the player as a possible alternative to signing Zaha.

Ole Gunnar Solskjaer has warned Paul Pogba that Manchester United will not be pressured into selling him, according to the Telegraph. “We are Man United, we don’t have to sell players,” Solskjaer reportedly said.

Roma want Tottenham’s £25m-rated centre-back Toby Alderweireld, says the Mirror. The Italians are hunting two new defenders and have approached Spurs, but are understood not to have made a formal offer. Alderweireld is available at that bargain price only until July 26, when a clause in his contract expires. Roma are reportedly the only club to have expressed an interest in the 30-year-old Belgium international, who has just 12 months left on his contract.

Daniel Sturridge: the former Liverpool player may currently be without a club, but at least he has been reunited with his stolen dog, the Guardian reports. The 29-year-old posted a video on Instagram on Tuesday showing a broken glass door, which he said was where thieves broke in and took his dog as well as a number of bags from his Los Angeles home.