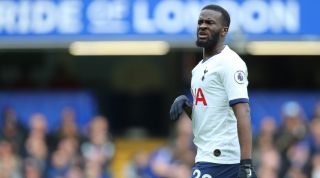 Tottenham Hotspur midfielder Tanguy Ndombele is being considered by Barcelona this summer, according to Mundo Deportivo.

Barca are in the market for a box-to-box player who can play in a variety of midfield positions and view Ndombele as a good option.

They are preparing for the possibility of losing both Ivan Rakitic and Arturo Vidal, with both being linked with exits from the Camp Nou.

Ndombele only arrrived at Spurs last summer in a club record deal that could rise as high as £62.8m. After starting promisingly, things have become more difficult for the France international since Jose Mourinho became manager.

Mourinho publicly criticised Ndombele following the 1-1 Premier League draw with Burnley. The 23-year-old then played no part in the second-leg of the Champions League last-16 tie with RB Leipzig as Tottenham were eliminated.

Ndombele isn't the only midfielder that Barcelona are considering, however, with Napoli's Fabian Ruiz also on their radar. The Catalans have been tracking Ruiz since his time at Real Betis.

Yet there is a £90m pricetag for the 23-year-old and that could convince Barca to turn their attention solely towards trying to sign Ndombele.