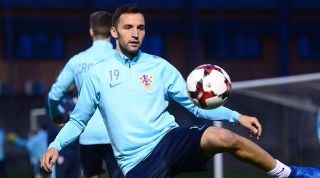 With Barcelona on the hunt for a new metronome in midfield, Marco Verratti has been touted as the best available option. While that maybe true, Napoli’s under-utilised Jorginho is arguably even more well-suited to such a role and would be a major acquisition for any club who pried him away from the Stadio San Paolo.

The 25-year-old is no longer guaranteed a berth in coach Maurizio Sarri’s first-choice XI, but his incredible passing ability has to be seen to be believed.

Jorginho made more passes per game last season (98) than any other player in Europe’s top five leagues, the second consecutive season that he had finished top of that particular category. Incisive, creative and a hard-working defensive player whenever Napoli lose possession, the Italy international has learned to affect the game with and without the ball. Arsenal have been linked in previous windows, and are reportedly interesting again this summer.

Serie A has long been identified as a fine breeding ground for central defenders, and Udinese's Samir appears to be yet another set for a fine future. The Brazilian was excellent throughout 2016/17, holding the club's makeshift backline together as the campaign progressed, and emerging as a reliable and impressive man-marker.

The 22-year-old learned to time his challenges superbly, winning 59% of the tackles he contested plus 67% of his aerial duels, making full use of his robust, 6ft 3in frame. Already wanted by Inter and Roma, a number of Premier League clubs could improve by adding the Samir to their squad this summer.

There’s been lots of talk of Serie A strikers making the leap to England over the summer, with the likes of Torino’s Manchester United-linked Andrea Belotti rightly attracting major attention after continuing to deliver goals in Italy. However, behind the headline-grabbing stars and prospective big-money transfers, there are still a number of bargains to be had in attack. Sampdoria’s Luis Muriel is arguably at the top of that list – and Everton appear to have taken notice.

The Colombia international is no longer struggling as he did a few years ago when he was compared to the Brazilian Ronaldo – and not for his goalscoring prowess. “It’s a cross I bear,” Muriel said earlier this year. “When things are going well, nobody talks about my weight, but the moment there are bad results everyone seeks blame.”

Now in much better shape, his 11 goals and five assists last term proved that he can make a difference at this level – and with a €25m buyout clause, he would be a much cheaper option than many other strikers in Europe’s top leagues.

Talk of Gianluigi Donnarumma’s expiring contract and Gigi Buffon’s impending retirement next year have been major news in Italy, but Lukasz Skorupski – the Roma goalkeeper who’s spent the last two seasons at Empoli – continues to operate below the radar.

The goalkeeper was unable to prevent the Tuscan side dropping into Serie B, but that should not detract from the incredible campaign he had behind their porous defence.

His tally of 145 saves was the highest in the division; Skorupski pulled off some sensational stops and did everything he could in an ultimately futile effort. Keeping 10 clean sheets for a team that finished 18th is no mean feat, yet Roma seem intent on letting him leave after investing in Brazilian Alisson.

Skorupski is therefore likely to be available at a relatively low cost, as talk of a €10-12m fee continues to surface. The Poland international has shown he is certainly worth that sum.

Torino’s 2016/17 campaign is likely to be remembered as the year Joe Hart represented the club – the presence of the England international even managed to overshadow Belotti’s continued excellence in attack. Yet while that duo stole the headlines, the emergence of Antonio Barreca was no less important and clubs in need of reinforcements at left-back would do well to try to steal him away.

The 22-year-old was thrown into the starting XI by Sinisa Mihajlovic following an injury to Cristian Molinaro, but by the end of the season he was the undisputed first choice. He’s spending the summer as part of a star-studded Italy side at the European U21 Championship, with his remarkable poise and defensive diligence set to be a major asset for the Azzurrini.

So too will the attacking prowess Barreca has displayed – he gets forward at every opportunity and works hard to improve the accuracy of his crossing. He chipped in with two assists last term, but showed that there’s plenty more to come in the future. His talent means that future is likely to lead him away from the Stadio Olimpico.

Most of the names on this list are emerging youngsters, but Badelj is an experienced international who appears to be at the end of his time with Fiorentina. All season long his agent has talked about a move away and his contract expires in June 2018, meaning the Viola are likely to accept a cut-price fee for the 28-year-old midfielder.

8 Bundesliga bargains that Premier League clubs should be looking at

Exit trials: What happens when you've only got one game to save a career?

He may be a functional player, but he’s dependable and never strays from his role of protecting the backline and allowing his more technically gifted team-mates the time and space in which to operate.

That has been his calling card for both Fiorentina and Croatia: making tackles and interceptions, before quickly giving the ball over to either Borja Valero or Luka Modric.

Fiorentina have a plethora of midfield options and will certainly sell him, meaning any side needing an injection of aggression should already be picking up the phone. Tottenham have been mooted suitors in the past, which could make sense given their need for a squad beef-up.