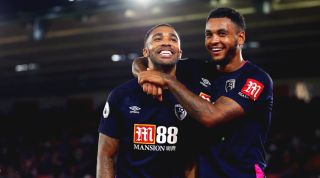 Bournemouth's Callum Wilson is almost certainly set to leave this summer, following the Cherries' relegation from the Premier League.

Tottenham Hotspur have emerged as a possible destination from the striker, who are still seeking a backup to Harry Kane. Wilson is said to fit the mould of a striker that Jose Mourinho would like in his side, and could be available for just £15m.

Both Newcastle United and West Ham United are interested in Wilson, 28, who cost Eddie Howe £3m when he signed from Coventry City. Manager-less Bournemouth are said to be demanding £20m now for their star player, though Spurs believe that they can negotiate that fee down a little.

It's set to be a busy window for Jose Mourinho and Daniel Levy. After agreeing a £15m deal for Southampton's Pierre-Emile Hojbjerg - with Kyle Walker-Peters heading to Saints in return - Mourinho is still said to be angling to sign another couple of defenders.

Thomas Meunier was linked with the North Londoners, but opted to join Borussia Dortmund on a free transfer. There's talk of Ryan Sessegnon potentially leaving to return to newly-promoted Fulham, while Jan Vertonghen's exit perhaps paves the way for another centre-back to join. Eric Dier - who's been in favour with Mourinho - has recently signed a new contract.

The Tanguy Ndombele saga, meanwhile, looks set to dominate for the rest of the summer. Tottenham's record signing last year from Lyon has struggled to settle in, with rumours of a rift with Mourinho hitting the papers on numerous occasions this season.

Inter Milan are apparently interested in taking Ndombele off Jose's hands; following the sale of Christian Eriksen in January, the two clubs are reportedly on good terms and may look to conduct a little more business with each other in future.

Callum Wilson will be eyeing a place in England's Euro squad next summer, after a dismal campaign on the south coast. With the Cherries having already sold Nathan Ake, they will be fending off interest for a number of their stars before their first season back in the Championship come September.

Aaron Ramsdale has been the subject of a £12m bid from Sheffield United, according to reports, while David Brooks is admired by a number of top clubs. Midfield cruncher Jefferson Lerma could yet leave the club, while Josh King - who had a move to Manchester United scuppered on January's deadline day - is in the frame to go as well.

Ryan Fraser has already departed, with chairman Jeff Mostyn is bracing himself for bids for highly-rated young Englishmen Lloyd Kelly and Lewis Cook.