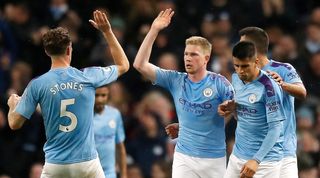 Each of the players below has made three assists so far this season in the Premier League – and you have seven minutes to name them all. Once you're done, send us a screenshot of your score to @FourFourTwo on Twitter to show everyone how you got on.

THEN TRY THIS QUIZ Can you name the 40 most successful Premier League managers by win percentage?

Last season's top Premier League assister, Eden Hazard, has moved on to pastures new – but a few of these names are setting up enough goals to take his place. Some are wingers, some are attacking midfielders, and some are even full-backs; some play for title challengers, and some are in relegation dogfights – but they're all chipping in by making sure their team has plenty of chances.

We think seven minutes is more than enough time to get them – so let us know how well you did by tweeting us at @FourFourTwo.

COMMENT Wherever Mauricio Pochettino ends up, the problems he faced at Tottenham will be the same