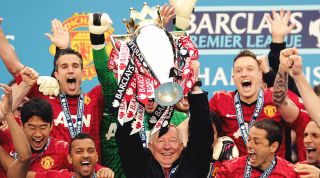 Ten minutes on the clock, 49 clubs to guess.

You don't need us to tell you that the Premier League is the single greatest top tier in world football.

It's partly because of the talent - the fact that our shores have welcomed the likes of Cristiano Ronaldo and Thierry Henry over the years, nurturing them into stars. It's the great managers, the amazing eras of continent-dominating sides.

But it's also the characters. The Pulises and the Pearsons, the Robbie Savages, Mike Deans and Jimmy Bullards.

The only league in the world considered to be the best where John Carver can claim he's the greatest coach in the league. Where David De Gea has a chant to the tune of Weather With You by Crowded House.

Where we can broadcast two teams who can't hit a barn door on a prime TV slot on at the weekend and have the cheek to call it Super Sunday. Where Harry Redknapp can tip Wes Morgan for an England cap, despite the fact he's played in a Copa America.

The Premier League isn't always good, but it's always great. Today, we'd like you to name every club that's ever been a part of it, since its inception in 1992.