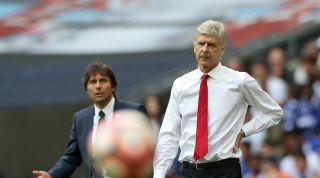 The big talking point: Eddie Howe. West Ham’s win on Monday night meant that Bournemouth are now one of only two Premier League sides left on zero points – not somewhere they would have envisaged being in the middle of September. Howe is rightly afforded some latitude on the south coast; he’s done tremendous things for Bournemouth, but failing to win here will raise some questions.

What will happen: Nerves. The trouble with the way Bournemouth play, pretty as it can be, is that their effectiveness diminishes sharply as their confidence falls. Passes start becoming too lateral and players stop taking necessary risks with the ball. Somehow, they have to pierce through that inhibition and start creating chances. Currently, they average just 2.3 shots on target per game – not good enough with their array of forwards.

What won’t happen: Ryan Fraser won't recover from injury in time to play - a shame, because whether he’s fielded from the start or introduced in the middle of the game, the Scot is the kind of direct, thrusting player that Howe absolutely needs at the moment.

The big talking point: Frank de Boer’s sacking. Well played Palace, that really was quite the commitment to change.

What will happen:Roy Hodgson will take charge for the first time, conveniently against a side that have scored just once from open play all season. Southampton’s defeat to Watford last weekend didn’t exactly put Mauricio Pellegrino under pressure, but he could certainly do with sneaking a win before Palace regain their equilibrium.

What won’t happen: Wilfried Zaha will be absent again, emphasising just how rash the De Boer sacking was. Forgetting the failed stylistic evolution and his issues with certain members of his squad, it seemed particularly harsh to judge him while starved of - by far - his best attacking player.

The big talking point: How Huddersfield respond to their first defeat. That’s always interesting. When the sun is out and players are basking in the novelty of Premier League life, newly promoted teams can often look like near certainties to avoid relegation. With that first loss will come the first pangs of doubt, though, and there’s no way of knowing quite how David Wagner’s players will react.

What will happen: However, in this instance there’s some foundation to the belief in Huddersfield. The performance at London Stadium was desperately poor but not really reflective either of who they are as a side, or what they've shown across their other games. Huddersfield are not reliant on adrenaline, novelty or any of those other intangibles; rather they are an extremely well-coached side that - logically at least - shouldn't regress because of a couple of unlucky deflections.

What won’t happen: Given how much money Leicester spent on the forward, Kelechi Iheanacho has had a quiet start at his new club, playing just 20 minutes of competitive football. Iheanacho’s restricted game-time over the past year had left him well short of match fitness, so too his late arrival after pre-season had been completed. Could he be left waiting again for a full debut? Islam Slimani was the preferred partner for Jamie Vardy against Chelsea last week, but it's unclear whether he'll start here too.

The big talking point: How Liverpool respond to last weekend’s humbling. Sadio Mane’s red card was only a partial excuse for what happened against Manchester City; it attracted the headlines and provoked a ceaseless debate about the laws, but it didn’t disguise just how insipid Jurgen Klopp’s team were. He’ll know that and he’ll want to see something far more committed.

What will happen: Burnley will give up an avalanche of shots. Because that’s what they do. Beneath the layer of assumptions about how they defend, how structured they are, and how committed Sean Dyche’s players can be lies an awful statistic: no team in the league concedes more efforts per game than the Clarets' 19.5.

What won’t happen: However, don’t expect Dyche’s players to fall face first into the counter-press. He’ll play five across the midfield, an obdurate targetman (Sam Vokes or Chris Wood) at the top of the formation, and look to skip over the home press.

The big talking point: Newcastle’s win at Swansea, which was actually quite impressive. They still obviously lack a forward - thanks Mike Ashley - but the construction of the midfield looked particularly cohesive in grinding the home threat to dust.

What will happen: Rising expectations for Stoke should they win. Despite almost everyone expecting them to struggle (yes, yes - us too), Mark Hughes looks to have reinvigorated his jaded side. Having been inactive for much of the transfer window, late deals for Jese, Eric Choupo-Moting and Kevin Wimmer have improved multiple different areas and enlivened what had previously looked a very stale group.

What won’t happen: Convincing retention. Heading into the weekend, both of these sides are in the Premier League’s bottom four for average possession per game. Stoke’s 42.4% and Newcastle’s 40.9% suggest that both are far happier without the ball, and that neither will be entirely comfortable with having to take the initiative.

The big talking point: Watford’s form. Two wins, two draws and no goals conceded since the opening day (vs Liverpool). What a start by Marco Silva.

What will happen: Probably the end of that unbeaten record. City were terrifyingly potent against Liverpool and made Feyenoord look like part-timers in midweek. Defence remains a concern for Pep Guardiola, but there’s now an awful lot happening at the top of this formation. Nobody is playing with City’s speed, accuracy or intent at the moment.

What won’t happen: The eagle-eyed among you will have noticed Dimitri Seluk chirping on Twitter on Wednesday, taking umbrage with suggestions that his client Yaya Toure is struggling for fitness. He even copied Sky Sports News in. Let’s assume that Toure won’t feature at Vicarage Road on Saturday and that, instead, we’re heading another one of those episodes.

The big talking point: West Brom’s defeat to Brighton: awful... just awful. While it’s common to see a Tony Pulis side decline after feeling assured of safety, it’s rare for them to look so loose this early in the season. It’s not time to worry, but Pulis will be hoping that his team's performance at the Amex Stadium was a blip rather than the beginning of a trend.

What will happen: Another West Ham win. There comes a point under a particular management style - one with rigidity at its core - when the players start to disengage. West Brom haven’t necessarily reached that point under Pulis, but last weekend was too worrying to simply be ignored.

What won’t happen: Given how long he’s been out and how much of Monday’s game he played, it would be a surprise if Andy Carroll started his second game in five days. West Ham are an entirely different proposition with him in the side, so hopefully Slaven Bilic’s desperation for points doesn’t override the need to be sensible with a fragile player.

The big talking point: The glow of Tottenham’s win over Borussia Dortmund. The Wembley Excuse, if it was ever valid, is now off the table.

What will happen: Probably a debut for Fernando Llorente. The Spaniard was signed to provide cover for Harry Kane and a slight variation on his style of play, so, given that Kane played almost the entire game on Wednesday night, his first Premier League action for Spurs seems set to come against the club he left.

What won’t happen: Swansea won’t create much. Paul Clement has built a tougher team than the one he inherited, but it’s not certain that he’s built a better one. Gone is the possession-based play of the Rodgers/Laudrup era and in its place a by-the-numbers approach which seems to rely - almost solely - on repeating the same phases again and again until the law of averages delivers. That really needs to change. New signings Renato Sanches and Wifried Bony should help that evolution, but both remain desperately short of match fitness and form.

The big talking point: As it always seems to be: a strong, intimidating Chelsea looking to give a listing Arsenal team a hefty shove.

What will happen: Antonio Conte managed to navigate the Champions League tussle with Qarabag comfortably while also resting several key players: Eden Hazard and Tiemoue Bakayoko appeared late on, while Victor Moses and Alvaro Morata were left out altogether. A fresh look for a team seeking their fifth win in succession.

What won’t happen: Fresh debate. Because - come on - we know how this ends by now. Chelsea win comfortably and Arsene Wenger is left answering the same old questions about his players’ fragility and, presumably, how the late start against Cologne on Thursday night damaged preparations.

The big talking point: Paul Pogba’s hamstring. Pogba left Old Trafford on crutches on Tuesday night (after the Champions League tie with Basel), and that’s left many wondering what his absence might do to the United midfield.

What will happen: ... and it’s certainly a problem. Nemanja Matic has been praised for the impact he's made on his new side, but his success has been in freeing Pogba – a rare midfielder with a passing range to multiply United’s pacy attacking threat. His injury won’t see them default straight back to their stale 2015 default, but expect this to be a harder game than it might have been as a result.

What won’t happen: Can we really be sure what kind of Everton team are going to show up? Having played so well at Manchester City and coped so admirably with a tricky situation at Hajduk Split, their performance against Tottenham was among the worst seen in the league this season. Their 3-0 trouncing at Atalanta, albeit with a weakened side, wasn't any better.