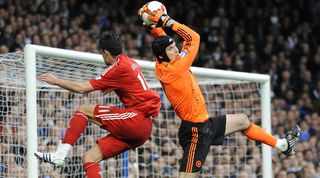 It's no fun being a Premier League keeper in the high-pressing, attack-minded modern Premier League where – let’s be honest – not many teams can actually defend.

As goal totals have headed north in the 10 (and a bit) years since 2006/07, it’s time to honour the custodians who’ve stemmed the tide with at least 20 clean sheets.

The man atop this list has a whopping 153 in that timespan, but has been aided by playing behind a rock-solid defence (in the past – less so now to be honest). Still, every perfect ‘0’ in your goals-against column counts – so let’s get cracking.

Important notebefore you start: Clubs below are only the Premier League sides a keeper has actually played for since 06/07. So teams before that – or ones they've signed for but not represented in the Premier League – aren’t listed.

Now, eight minutes are on the clock, then let us let us know how you did @FourFourTwo - we’ll retweet the best scores, if you don’t give answers away. We’d love it if you challenge some pals too. Ta!

(Note: Adblockers can stop you seeing our quizzes, so please turn them off. Thanks)