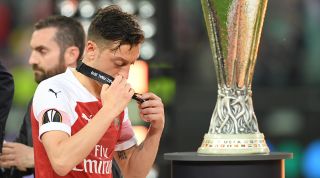 Newcastle are drawing up a shortlist to replace Rafael Benitez, with Porto boss Sergio Conceicao among those being considered for the manager’s job, the Mail says. St James’ Park officials have been in touch with 44-year-old Conceicao, who is reportedly not ruling out the prospect of a move, the paper says.

Mesut Ozil looks set to remain part of Arsenal’s future as reports suggest the Gunners are struggling to attract offers for him, according to the Mail. Arsenal were believed to want to offload their high earner in the transfer window to free up funds for Celtic’s Kieran Tierney and Saint-Etienne’s William Saliba, the paper says.

Meanwhile, the Telegraph reports that Arsenal will need to up their original £15 million bid to land Tierney from the Scottish champions. Celtic are said to value their left-back at £25 million – but that is thought to be more than half of the Gunners’ £45 million summer transfer budget.

Bayern Munich have been turned away as they pursue Chelsea’s Callum Hudson-Odoi, the Mirror says. The winger, who is recovering from an Achilles injury, has long been admired by the German club, but the Blues want to hold on to their 18-year-old ace. Bayern are said to be diverting their attention to Manchester City winger Leroy Sane in the search for a replacement for Arjen Robben.

Samuel Umtiti: The Barcelona defender is on the radar of Manchester United, Spanish paper Mundo Deportivo reports, as they look for a cheaper alternative to Leicester’s Harry Maguire.

Dan-Axel Zagadou The Borussia Dortmund centre-back is reportedly keen to leave the German side, leaving the path clear for Arsenal to make a summer swoop, German paper Bild reports.

QUIZ! Can you name Newcastle United's managers since 1992?