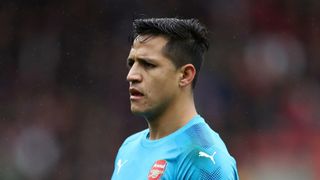 Arsenal have not received a formal offer for Alexis Sanchez or Mesut Ozil since the transfer window opened, according to Arsene Wenger.

Chile forward Sanchez has once again been linked to Premier League leaders Manchester City after a proposed switch to the Etihad Stadium collapsed on deadline day four months ago.

City boss Pep Guardiola told reporters after Sunday's 0-0 draw at Crystal Palace that he expected Sanchez to remain at Arsenal but a medial knee ligament injury to Gabriel Jesus could prompt a renewed push for a player who is out of contract at the end of this season.

Germany playmaker Ozil and midfielder Jack Wilshere are also approaching the end of their respective deals at Emirates Stadium but Wenger told a news conference ahead of Wednesday's home match against Chelsea that no offers had been forthcoming.

"We have not been contacted by anybody, no," he said.

"We will try [to keep them] but I have answered that question many times. At the moment I think the best is not to talk too much and focus on tomorrow's game."

kicks off just 73 hours after finishedWhat impact does that have on our preparation? January 2, 2018

Wenger underlined his desire to keep all three members of the trio but, while Wilshere has offered positive indications with regards to staying after getting his Arsenal career back on track, the prospect of losing Sanchez and Ozil does not intimidate the long-serving boss.

"This club has lost many big players and has always responded well," the 67-year-old said.

"Massive players have left this club, so this club will always be in a strong position on that front. But obviously you want to keep your best players.

"As long as things are not signed, you can say you are positive or negative or super positive.

"If things are not signed you shut up and you announce things when they are concrete. It is as simple as that."

Wenger confirmed Arsenal's intention is to look for reinforcements during January and acknowledged the contract impasses would inform his thinking.

"We are out there to do some things, yes, but when is very difficult to say because it does not depend only on us," he added.

"We are open in any position for exceptional players who can give us a plus. It depends a little on the injuries as well.

"Also, it depends on who will extend their contract of the players who are out of contract in June.

"We'll have to take the consequence of these decisions and respond to it."