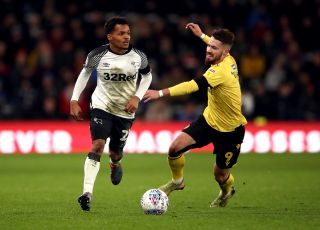 Last season’s play-off finalists Derby County have achieved back to back wins since the re-start, dispatching Millwall and Blackburn Rovers to bank six points.

After a shaky start to the season, results have picked up generally since former England captain Wayne Rooney joined in January, and the Rams may have even played themselves in to late play-off contention. They sit just three points off the top six and will fancy their chances of ruffling a few feathers over the next six matchdays.

Opponents Reading are also unbeaten since the restart. A 3-1 win over Birmingham preceded a draw at home to Stoke. Mark Bowen's side have probably left it too late for a run at the play-off spots, but will take heart in being comofrtably mid-table as a bizarre season draws to a close.

Kick-off is at 1pm BST and the game is being shown on iFollow in the UK - the cost for UK residents is £10 per game, but just £6 for overseas viewers, so if you use a VPN you can get it cheaper. See below for watching details where you are.