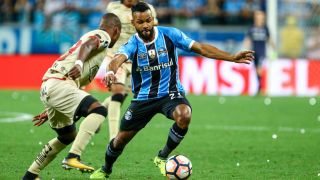 Gremio will face Lanus in the Copa Libertadores decider, despite suffering a second-leg defeat to Barcelona in the semi-finals.

A powerful 33rd-minute strike from Jonathan Alvez inside the penalty area was all that separated the two sides at Arena do Gremio as 1990 and 1998 runners-up Barcelona triumphed.

However, Brazilian outfit Gremio still advanced to the final 3-1 on aggregate thanks to their 3-0 victory away from home in the opening leg.

Gremio will go head-to-head with Argentina's Lanus – who completed a stunning comeback to eliminate River Plate in the semis – in the two-legged Libertadores final, starting November 22.