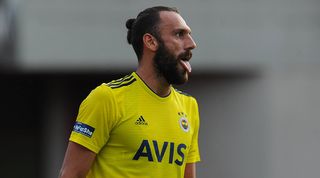 Real Madrid and Barcelona are preparing to go head to head in an audacious battle to lure defender Virgil van Dijk and manager Jurgen Klopp away from Liverpool, according to AS. The Spanish outlet says both clubs are becoming concerned that their status as European giants is fading. This coincides with Liverpool’s powerful start to the Premier League campaign, and after Klopp also guided them to the Champions League title last season. Van Dijk, who was bought by Liverpool for a defender’s world record of £75 million, has been a star for the Reds in each of their five games this term.

Manchester United have joined the race to sign Kosovo international Vedat Muriqi after watching him perform against England last week, The Sun reports. Tottenham are said to have been monitoring the 25-year-old during an impressive run of form for his club, Fenerbahce. But United are also now keen to sign the striker, having sent scouts to watch him in Kosovo’s 5-3 loss to England in Euro 2020 qualification last week. Ole Gunnar Solskjaer is on the lookout for more forward power, following the departures of Romelu Lukaku and Alexis Sanchez.

United are also in the hunt to sign German superstar Toni Kroos from Real Madrid, according to Germany’s Bild. The Red Devils would be willing to pay up to £67m for the 29-year-old, especially with rumours circulating that Real Madrid still want Paul Pogba. The English giants almost signed Kroos in 2013, but the deal collapsed at the last minute, and Kroos joined Madrid a year later.

Mario Mandzukic, who has been linked to English clubs including Manchester United, might be going to Qatar instead. Al-Gharafa are ready to offer him €6 million per season to leave Juventus, according to Italian website Calcio Mercato. Mandzukic is said to instead favour a move to Major League Soccer club Los Angeles FC, who have also made their interest known.

Christian Eriksen is rejecting repeated bids by Tottenham to convince him to stay in north London while his agent angles for a move to Real Madrid, according to Spanish newspaper Marca. Spurs reportedly offered the Dane to the Spanish giants in the last transfer window, but Real were more interested in trying to sign Paul Pogba.

The strongest players in Fifa 20 have been revealed https://t.co/t9DPINoRkspic.twitter.com/l51i3ifSIj— The Sun Football  (@TheSunFootball) September 15, 2019

N’Golo Kante: Could be a target for Real Madrid after their ex-Chelsea players Eden Hazard and Thibaut Courtois recommended their former Stamford Bridge team-mate to club bosses, The Sun says.

Nemanja Matic: The Manchester United midfielder could be on his way to Juventus in the January transfer window, the Daily Mirror says.

Logan Pye: Arsenal are set to win the race for Sunderland's 15-year-old next summer, The Sun reports.

QUIZ! Can you name the last 50 Premier League Manager of the Month winners?

INTERVIEW Mark Goldbridge: meet the Alan Partridge of Manchester United YouTube – “I take it as a compliment... just be who you are”