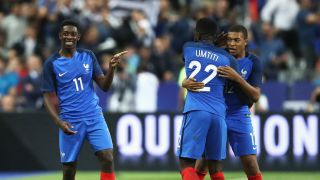 Kylian Mbappe will join Neymar in a fearsome Paris Saint-Germain forward line after completing his switch from Monaco.

Initially a loan move, PSG have an option to buy Mbappe that, when exercised, will secure the 18-year-old on a contract until June 2022 for a reported €180million.

Mbappe follows international team-mate Ousmane Dembele in making waves in the transfer market during a money-spinning window, with the 20-year-old winger having joined Barcelona for an initial €105m from Borussia Dortmund.

But beyond two of the hottest properties in European football, France coach Didier Deschamps boasts an enviable array of young talent that could set up Les Bleus for a generation of dominance.

Kimpembe made his Paris Saint-Germain debut back in 2014 but did not really break through until last season, making 19 appearances in Ligue 1 and earning a call up to the France squad for the World Cup qualifiers with Bulgaria and Netherlands last October.

The highlight, though, came as he played the full 90 minutes in PSG's emphatic 4-0 win over Barcelona in the Champions League last-16 first leg. Kimpembe appeared at home on the big stage and, with Thiago Silva soon turning 33, he and Marquinhos look set to be the long-term centre-back pairing in Paris.

After impressing Pep Guardiola so much that he signed him for Manchester City from their Champions League conquerors Monaco, expect Mendy to quickly add handsomely to his four France caps.

The left-back was a key component of Monaco's charge to the Ligue 1 title and the semi-finals of Europe's top competition, and Deschamps will be a keen observer after the 23-year-old made an impressive Premier League debut in City's last-gasp weekend win over Bournemouth.

57 - Benjamin Mendy fired in 57 crosses from open play in the Champions League last season, more than any other player. Centred. July 22, 2017

Barca's defence looked vulnerable as they surrendered LaLiga to arch-rivals Real Madrid and crashed out of the Champions League to Juventus, but Umtiti provided one of few positives.

Lemar is behind only ex-Monaco team-mate Kylian Mbappe and Dembele as the hottest French property right now.

The 21-year-old served as a key creative presence in Monaco's incredible 2016-17 campaign. He had nine goals and 10 assists in Ligue 1 and keeping hold of him would serve as a huge boost to the seemingly slim hopes Leonardo Jardim's side have of retaining the title.

Comfortable on the ball going forward and adept at winning it back, Rabiot provides an assured presence in the engine room and should be a mainstay for the Parisians and France for years to come.

While the highlight of Bakayoko's 2016-17 campaign with Monaco perhaps came when he scored the decisive goal in their Champions League last-16 tie with Manchester City, it is his ability to win possession in the middle of the park that prompted Chelsea to bring him to Stamford Bridge.

Playing with tenacious countryman N'Golo Kante, Bakayoko will be expected to make further strides in west London as Antonio Conte plots a defence of their Premier League crown in 2017-18.

Tolisso's contributions for Lyon flew under the radar somewhat in the face of Monaco's astounding exploits. However, no other midfielder in Ligue 1, the Premier League, the Bundesliga, LaLiga or Serie A had a bigger goalscoring impact than the 23-year-old, who netted 14 times in all competitions.

Thrust into the spotlight at Bayern Munich following a €41.5million move, look for Tolisso to become much more of a household name should he flourish under Carlo Ancelotti.

An unknown teenager at the start of last season, Mbappe's talismanic efforts in spearheading Monaco's charge both domestically and in continental competition led him to becoming the number one target for the major teams in Europe.

Real Madrid, Barcelona, Arsenal and Manchester City were all linked with the 18-year-old but PSG - making lavish moves in the transfer market after Mbappe played a key part in dethroning them in Ligue 1 last season - have got their man.

Neymar's stunning €222m move to Barcelona opened up a vacancy on the left flank at Camp Nou and Dembele is the man who will attempt to fill that considerable void after a stunning debut season in the Bundesliga with Dortmund.

With just seven international caps to his name, Dembele is yet to fully establish himself on the international stage although his virtuoso display in tandem with Mbappe and winning goal as 10-man France saw off England 3-2 at the Stade de France in June suggested this arrival is a matter of time.