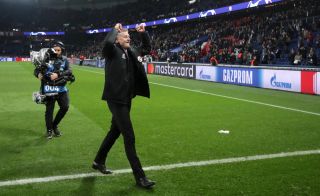 Ole Gunnar Solskjaer says Manchester United need to harness the spirit shown against Paris St Germain and put in a “perfect performance” if they are to navigate their way past Manchester City and reach the Carabao Cup final.

United face an uphill battle in their attempts to reach March’s Wembley showpiece after a chastening 3-1 home loss in the semi-final first leg against Pep Guardiola’s men three weeks ago.

Marcus Rashford’s goal in that Old Trafford encounter gives United a glimmer of hope heading to the Etihad Stadium on Wednesday, but Solskjaer is under no illusions about the task that awaits them.

Despite that, the Norwegian believes last year’s stunning comeback success against PSG – United won 3-1 in Paris to reach the Champions League quarter-finals on away goals, having lost 2-0 in the home leg – can act as inspiration, along with December’s impressive 2-1 triumph at City.

Ole on Wednesday's game: "It has to be a perfect performance to win with two goals against such a good team away from home.— Manchester United (@ManUtd) January 28, 2020

“Well, it looked like it was over at half-time,” Solskjaer said, reflecting on the first leg. “I have to say the second part of that first half, they outplayed us for a while and it’s hard.

“But then when we got the goal, of course you’re back in it, we hope for another one.

“But now we’ve got to go into the memory bank and think PSG because we’ve done it against good teams before and it gives us some hope, and the game in December of course gives us hope that we can do something there.

“It has to be a perfect performance to win with two goals against such a good team away from home, so for us it’s not about away goals, we just need to score two more than them.

“When they happen and how it happens, if we concede two we need to score four, so it would be good not to concede first because that makes it less difficult.”

Key men Paul Pogba, Scott McTominay and Rashford will be absent at the Etihad Stadium, where Nemanja Matic is a doubt after picking up a knock in Sunday’s 6-0 shellacking of Tranmere in the FA Cup fourth round.

The Serbia international trained with the squad on the eve of the match, as did Marcos Rojo and teenager Ethan Galbraith.