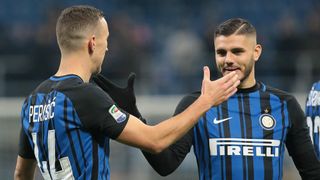 Inter boss Luciano Spalletti is confident Mauro Icardi and Ivan Perisic will stay at the club during the transfer window.

The future of striker Icardi has again come under scrutiny, with Real Madrid said to be considering a bid as they look to replace Cristiano Ronaldo, who has joined Juventus.

Perisic, meanwhile, has been linked with Manchester United for the second year in a row after impressing in Croatia's run to the World Cup final.

But Spalletti hopes Inter's return to the Champions League will help to ensure his best players stay at San Siro before the start of the season.

"They're exceptional professionals, reference points for our team, who have helped to determine the growth of this team's character," he told Rai. "Qualifying for the Champions League has brought new stimulus.

"I've talked to Ivan: he's tired. He's resting now and then he'll come with us [for pre-season]. He didn't give me any sign of wanting to leave. It's the same with Mauro.

"It's clear he'll need to revise his contract, but the signs are all positive. They have to stay."

With Joao Cancelo having opted to sign for Juventus, Inter have been tipped to bring in a new right-back as well as another midfielder before the season gets underway.

Atletico Madrid's Sime Vrsaljko has been linked, and Spalletti admits he is an admirer of the Croatia international, along with reported long-term target Arturo Vidal.

"[Sporting director] Piero Ausilio is the guy who negotiates," he said. "He's coming back from China and I do not know the latest news. They are definitely strong players."