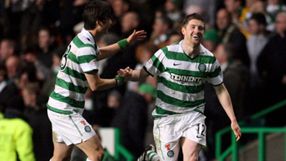 Rangers forward El-Hadji Diouf was also sent off after the final whistle and Celtic manager Neil Lennon and Rangers assistant Ally McCoist had to be separated after squaring up as tempers boiled over.

Wilson found the net with an untidy finish three minutes into the second half to settle the fifth-round replay.

Rangers were reduced to 10 men when Steven Whittaker was sent off for his second yellow card following a mistimed tackle on 34 minutes. Madjid Bougherra was red-carded in stoppage time.

Celtic were largely untroubled and could have added to their lead with Georgios Samaras missing two good chances either side of Wilson's goal.

After losing Whittaker, Rangers, who came into the game affected by illness and injuries to key players, were largely subdued and failed to create a chance of note.

Wilson put Celtic ahead with an mis-hit volley that bounced high into the net after his initial shot was brilliantly blocked on the line by Sasa Papac.