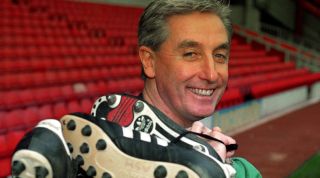 We’re celebrating all things '90s with a special issue of FourFourTwo magazine this month. Among many other things, it was the decade that saw the rebranding of England’s top tier as the Premier League and the influx of cash changed the game, from kick-off times to snazzy sponsors, to player wages.

Managers began to feel the pinch, however, as there was now increased pressure to stay – and perform – in the lucrative Prem. A total of 67 gaffers held the role of Premier League boss from the start of the ‘92/93 season to the end of 1999 - and that’s not even including caretakers such as Arsenal’s Stuart Houston ‘we have a problem’ or Crystal Palace’s ‘Bald Eagle’ Attilio Lombardo.

It’s near impossible to perfect this quiz with some spectacularly obscure gents on here – although at least Manchester United have helped you out by keeping the same manager throughout. Who was he again?

Anyway, 12 minutes on the clock and the best of British luck to you. Clubs managed and Prem eras are the clues below. Let us know how you get on @FourFourTwo – we’ll retweet the best efforts – and torture some pals by challenging them as well. You know you want to. (We reckon 50 is a great score here.)