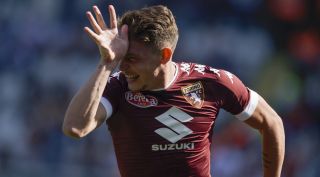 Serie A is doing its best to shrug off two lazy stereotypes. Often labelled dour and defensive, the 2016/17 campaign has actually laid on some very un-Italian scorelines – see Milan’s stunning 4-3 victory over Sassuolo, for example.

While those eye-catching results have gone someway towards ending the Catenaccio-inspired narrative, the new campaign has also seen a surprising number of young players shoot to prominence in a country where ageing players like Francesco Totti and Antonio Di Natale seem to live forever. Our recent list of the 59 Best Under-21 Wonderkids in the World featured three such stars – but they're not alone...

If the name looks familiar, it's because it is: the 21-year-old Genoa striker is the son of Atletico Madrid boss Diego. "He has his father’s hunger and will to win," commented team-mate Nicolas Burdisso recently. But while Simeone Snr. was a combative midfielder who never needed an excuse to level an opponent with a crunching tackle, the younger man is a pacey forward looking to avoid those scything challenges.

Doing just that, he has netted well-taken goals in each of his first two starts for the Rossoneri, much to the delight of Genoa coach Ivan Juric. “Simeone is a good player in the area, but with a lot of room for improvement out of it. He runs a lot and we are happy with him,” the Croatian said recently. “However, I would prefer it if people talked more about him and not his father. I don’t think it is an easy comparison for the boy.”

“It’s the moment that every kid hopes for in their life,” Manuel Locatelli said moments after leaving the pitch, his voice quivering as he continued to fight back tears. “When I realised where the ball was going, I couldn’t believe it. I started to run and then it was all real.”

The 18-year-old Milan midfielder had just scored his side’s third goal in that aforementioned clash with Sassuolo, crying with joy as he ran off in celebration.

Fans of the Rossoneri were similarly rejoicing – and their happiness at seeing some bright young stars emerging was only natural having suffered through some dire times recently. With investment thin on the ground, it will take special players like Locatelli and Gianluigi Donnarumma to break the cycle of mediocrity currently engulfing the San Siro.

Locatelli is a central midfielder who enjoys sitting deep and showing off his excellent range of passing, and it's no surprise that many supporters would love to see him start over the increasingly poor Riccardo Montolivo. He still has much to learn, but the coming seasons could see him do just that very well: coach Vincenzo Montella has proven to be a fine mentor for such young talents.

If Locatelli represents Milan’s bright new future, then Andrea Petagna is undoubtedly their error-strewn past – indeed, he nearly quit football because of them. Three years older than breakout star Locatelli, the Atalanta man was also a product of the Rossoneri's youth sector, but – like Matteo Darmian, Pierre-Emerick Aubameyang and countless others – was cast aside by Adriano Galliani.

Sent on a raft of loan deals, Petagna was eventually sold to Atalanta as part of the club’s ongoing cost-cutting, but has finally begun to blossom into the robust striker many expected. At 6ft 3in he is remarkably mobile, and has netted three goals in just 180 minutes of Serie A action in 2016/17 – including a winner against Napoli last time out.

Franck Kessie: The Arsenal-scouted Ivorian who dreams of Manchester United

Sassuolo don’t often give space to foreign players, preferring instead to concentrate on native talent. Yet when it came to replacing Atletico Madrid-bound Sime Vrsaljko this summer, the Neroverdi quickly took Juventus youngster Pol Lirola on loan and haven't regretted that decision. The 19-year-old Spaniard has slotted straight in at right-back, proving to be a diligent defender and a willing forward runner capable of providing accurate crosses or a burst of speed into the box.

He introduced himself to supporters at the Mapei Stadium with a stunning goal against Athletic Bilabo on his full debut, and his style of play seems to make him a perfect fit for when Stephan Lichtsteiner and Dani Alves move on from Juventus.

Having spent time at Barcelona – where he was banished on loan for putting ice cubes into a team-mate's bed – it's been no surprise to see Keita Baldé Diao emerge as a talented forward with Lazio. He's largely been a reserve behind Felipe Anderson and Antonio Candreva up to this point, but the latter’s summer move to Inter has opened up space for the 21-year-old.

Keita has been moved centrally alongside Ciro Immobile having been previously stuck on the wing, and the switch has paid of spectacularly with two goals and two assists in his five appearances. The speedy Spain-born trickster's future now finally appears to be heading in the right direction, and some of Europe’s top clubs – see Milan, Inter and Liverpool – are said to be monitoring the Lazio youngster's progress.

If Italian football is to truly put its defensive reputation out to pasture, it will need to develop some dangerous forwards – the national team is crying out for help and the Serie A scoring charts are largely filled with foreign names. Yet while the likes of Gonzalo Higuain, Mauro Icardi and Carlos Bacca inspire those headlines, Torino have seemingly unearthed the kind of player who could kill off the lazy stereotype for good.

9 Bundesliga kids who you'll soon know about this season

Andrea Belotti looked on while Joe Hart drew major attention to the club, then stole the spotlight with some incredible displays. Il Gallo's ('the Rooster', thanks to his bird-honouring celebration) five goals put him just one behind Higuain, Icardi and Bacca despite playing just 384 minutes so far this term. It's pushed the Granata up the table and into contention for a Europa League place.

Belotti – interesting both Arsenal and Liverpool if you believe the redtops – has also earned a spot in the Italy squad, with former Torino boss Giampiero Ventura knowing exactly what he is capable of. The 22-year-old is a new breed of forward to break into the Azzurri setup, with the likes of Domenico Berardi set to follow as Serie A finally shows off some of its exciting talent.

FourFourTwo's 59 Best Wonderkids in the World