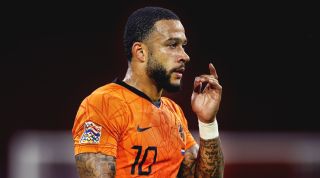 Apparently, Barcelona see the Dutch schemer as the perfect player to reignite their attacking inadequacies, with former national boss Ronald Koeman hoping to reunite with Depay at Camp Nou.

Despite Depay being similar to the likes of Messi and Griezmann in that he looks to get the ball to feet and create, Koeman has identified the Ligue 1 star as someone he'd like to bring into the side. Barça are also looking at a deal to sign Liverpool midfielder Gini Wijnaldum, as Bayern Munich star Thiago Alcantara closes in on a move to Anfield.

Now, however, Aulas says Roma have joined the race for Depay, too.

Roma last won Serie A in 2001 and signing one of Ligue 1's biggest stars would be a hell of a coup for the club - who are without Champions League football for the second season running, following Atalanta pipping them to the post again.

Though La Lupa aren't exactly brimming with money though, Lyon are also facing a season without Champions League football, having finished seventh in the abandoned French domestic season.

Arsenal are closing in on signing Houssem Aouar from the French outfit, as it is. The Gunners have offered £35m plus want-away troublemaker Matteo Guendouzi for Lyon's prized midfielder, who is also wanted by the likes of Juventus and Manchester City.

Moussa Dembele and Jeff Reine-Adelaide have been linked with moves away from Lyon - with the latter openly stating he wants to leave the club - so Aulas will be sorry to lose Depay on top of the players he may be resigned to selling.

Depay joined Lyon after a torrid spell under Louis van Gaal's management at Man United, apparently hiring a team to conduct analysis for which team would suit his style of play best. Since then, he has impressed in the much smaller pond of Ligue 1, taking over the captain's armband too.

It's thought that Depay could well leave Lyon for as little as £22m.