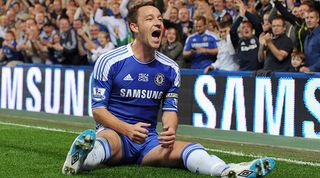 Even in the era of wing-backs and central defenders having to pass the ball rather than blindly hoofing it forward, it’s still the primary job of defensive players to stop goals rather than score them.

Yet there are few things that seals a defender’s hero status more than chipping in with a few. Take Steve Bruce, the former Manchester United captain who – through a combination of penalties and brave headers (he wasn’t born with that nose) – once scored 19 goals in a single season. (More of those unlikely individual campaigns here.)

However, that was in 1990/91, before Sky Sports invented football (although Brucey did turn out in 147 Prem games still) - and what we’re testing you on is every player to have scored 12 or more league goals in the post-1992 Prem era.

One note: Players change position, of course, so we’re being strict and counting only players who’ve spent the majority of their careers in defence. So no James Milner (too much time in midfield), Antonio Valencia (too much time at right-wing), Kieran Richardson (more games on the left wing) or Paul Warhurst (too much time everywhere) for example.

Below are each defender’s total goals, Premier League clubs and their nationality. Let us know your score @FourFourTwo - we’ll retweet the best, if you don’t give any answers away - then challenge some pals too.

(Note: Adblockers can stop you seeing our quizzes – please turn them off. Thanks!)