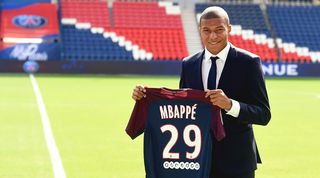 You have eight minutes to guess 40 players.

THEN TRY Quiz! Can you get 25 correct answers in our 'Who Am I?' European Championships quiz?

It was on this day in 1994 that Jack Walker’s Blackburn Rovers announced their intentions as big-spenders when they smashed the British transfer record by signing Chris Sutton.

But this was 1994. It was a different time, when Britpop ruled the charts and the Irish were making World Cups that the English couldn't. Sutton only cost £5m.

We say "only", like all of us at FourFourTwo wouldn't love to find that kind of cash down the back of the sofa. But clubs these days are making a mockery of that fee; Rovers spent about that much on Sam Gallagher last summer, and they're in the second division these days.

Today, we're not just looking for the most expensive transfers of all time - we're looking for the record-breakers. The ones that broke the mould. The Chris Suttons of the world: it's not often you can group him in a category with some of these fellas...